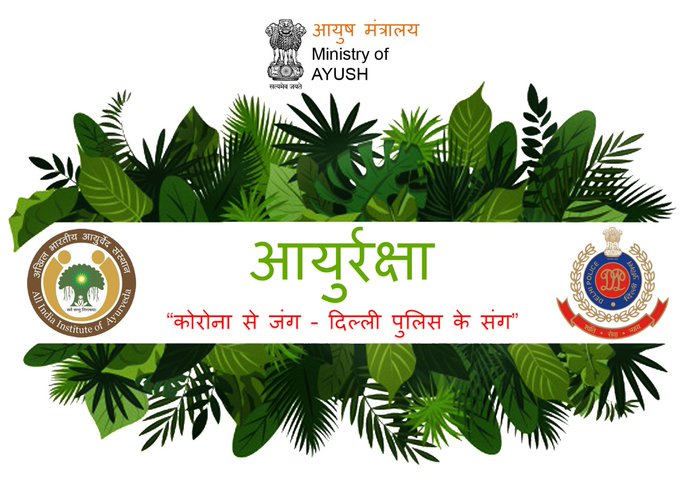 These measures are as per the advisory issued by the Ministry of AYUSH. The recommended formulations like Chyawanaprasha (Amla as main content), Anu Taila and SanshamaniVati (prepared from Guduchi) have simple herbs which are time tested and scientifically proven for enhancing the immunity.

On this occasion, Secretary, Ministry of AYUSH Vaidya Rajesh Kotecha, highlighted the role of Giloy as Vayasthapana (Anti-aging herb). He mentioned that the Ministry is working for AYUSH medicines to be given as add-on therapy for COVID 19 positive cases. He also appreciated the efforts of Delhi Police as frontline warriors.

Delhi Police Commissioner Shri S N Shrivastava appreciated the efforts of the Ministry of AYUSH & AIIA toward health promotion for Delhi Police. He highlighted immune boosting effect of simple Ayurveda herbs which are time tested and scientific. He mentioned that the joint venture of AIIA and Delhi Police is biggest ever first of its kind and will be successful and role model for others.

Delhi Police has come forward with a proposal for maintaining the health of front line COVID warriors like Delhi police personal through Ayurveda immunity boosting measures. The proposal would be implemented in a phase wise manner. The distribution will take place for nearly 80000 personal of Delhi police across 15 districts of NCT Delhi. All India Institute of Ayurveda has nominated 3 main coordinators under the Director of Institute. 15 nodal officers of AIIA have been identified for 15 districts of Delhi State who will be working in close coordination with 15 Nodal officers from Delhi Police.

For distribution of medicines, special Kits are to be prepared which will contain the formulations, method of use and advisory issued by Ministry of AYUSH in Hindi and English. The medicines would be procured from government pharmacy (IMPCL) under Ministry of AYUSH.

It has also been planned to set up a Kiosk in every Delhi police district headquarters wherein the complete diet and lifestyle related information as well as usefulness of Ayurvedic formulations in boosting the immunity would be explained by consultants of All India Institute of Ayurveda initially for 15 days.

Promotion of health and prevention of diseases by a healthy daily regimen of lifestyle and immune boosters is the core objective of Ayurveda.