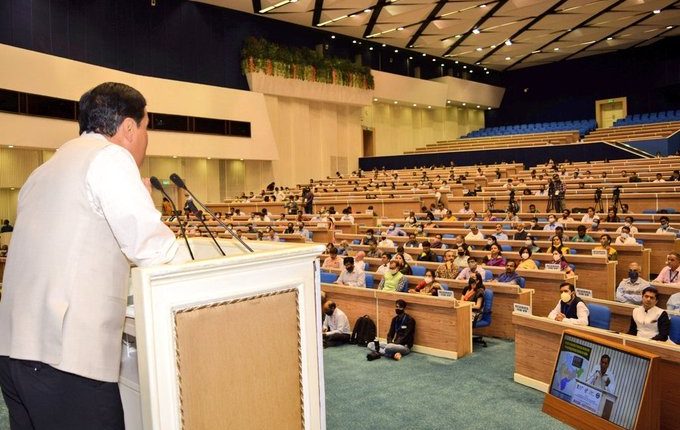 New Delhi: Buoyed by the growing global and domestic demand and enabled by a strong support to regulatory, research and development, and back-end infrastructure by the Ministry, the market size of AYUSH has grown by 17 percent in 2014-20 to reach US dollars 18.1 billion, Union Ayush Minister Shri Sarbananda Sonowal said on Friday. The Minister was speaking at the inauguration of ‘AYUR-UDYAMAH’ atNew Delhi, where he released the RIS report titled ‘AYUSH Sector in India: Prospects and Challenges’. On the occasion, AIIA ICAINE – All India Institute of Ayurveda – Incubation Centre for Innovation and Entrepreneurship – the first of its’ kind incubation centre under the Ministry of Ayush to promote the Start-ups was also launched by Union Minister of Food and Processing Industries Shri Pashupati Paras Ji.

As per the Research and Information System for Developing Countries (RIS) report, despite a slump in economic activity in 2020 due to the pandemic, the industry is projected to reach US$ 20.6 billion in 2021 and US$ 23.3 billion in 2022. In terms of global share, India has grown faster in the AYUSH market as compared to the world and accounts for about 2.8 per cent of the market, which is likely to hold even though disruptions in production are not ruled out.

During the same period, different product segments have grown at a much higher rate than the overall industry. Plant derivatives experienced 21 per cent growth in the period 2014-2020 followed by nutraceuticals (20.5 per cent), pharmaceuticals (15.8 per cent), plant extracts 14.7 per cent and herbal plants (14.3 per cent).

Ayush medicines have done exceedingly well in helping Covid19 patients recover faster across the world during the first and second wave of pandemic in the last one and a half years, Sonowal said.

Talking about the new incubation centre, Shri Sonowal referred to PM Narendra Modi’s Independence Day speech where he said that the Start-ups were the new types of wealth creators in the country. “He outlined the need of the government to relentlessly work towards making India’s Start-ups and the Start-up Ecosystem, the best in the world. This will contribute to the long term vision of AatmNirbhar Bharat,” Sonowal said.

The Minister said that the new ideas need a conducive environment to prosper and the centre will help young entrepreneurs to establish themselves before they scale up their ventures. “I hope the Start Up initiative will help Ayushentrepreneurs in translating innovations into products and services that are commercially viable. This Food Start up initiative under the leadership of Mr. Rajesh Kotecha, Secretary Ministry of Ayush, Prof Tanuja Manoj Nesari, Director AIIA and the whole team of AIIA will have close linkages of the Ayush ministry with other ministries of Govt of India such as Ministry of Commerce, Ministry of Food Processing Industries and MSME and will be an ideal platform of knowledge exchange,” Shri Sonowal said.

The minister said that AIIA was also working in preparation of a Diabetes Protocol where the experts from all over the country have contributed to prevention and management of diabetes in the public health initiative. “The protocol will help the practitioners, research scholars and academicians to fulfil the needs of diabetic care and to know recent advancements in the field,” he said.

Minister of State for Ayush, Munjpara Mahendrabhai, while inaugurating Blood Bank of AIIA, said that the Blood Bank will cater to the needs of patients from Delhi and adjacent states. “It is important that the donor feel safe while donating blood samples and with high end filtration mechanism in AIIA under skilled and trained doctors, we ensure that all patients are tested comprehensively before receiving and donating blood.”, he said.

The Ayush Ministry is celebrating November 2 as the 6th Ayurveda Day and has planned a series of activities around it including mega events at National Institute of Ayurveda, Jaipur, on the day.

University of Exeter: Extent of migration of sooty terns presents…