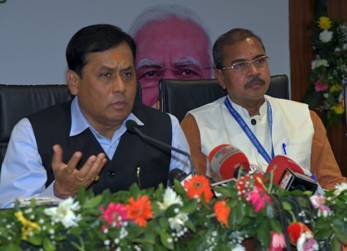 Launch of 5-minute Yoga protocol for workaholics, distribution of medicinal plants to 75 lakh families and prophylactic medicines to geriatric population planned during the week-long campaign

Shri Sonowal said that the week-long activities and campaigns, from August 30 to September 5, will aim at ultimately reaching to remote areas of the country and address all categories of our population, from children to our old people, from farmers to corporate.

Azadi Ka Amrit Mahotsav is a series of events being organised by the Government of India to commemorate the 75th Anniversary of India’s Independence. The Mahotsav will be celebrated as a Jan-Utsav in the spirit of Jan-Bhagidari.

The activities include cultivation of medicinal plants on 75,000 hectares of land to benefit farmers on August 31, the launch of the Y-Break App, a five minute Yoga protocol for office goers on September 1, distribution of Ayush prophylactic medicines with a special focus on the above 60 years age group on September 2, taking medicinal plants to the doorstep of 75 lakh families during the year under ‘AyushAapkeDwar’ programme on September 3, a series of sensitisation lectures and distribution of IEC material to school and college students on September 4 and a webinar on Y-break application on September 5. The Ayush week will begin with a national webinar for Ayush students on the topic “Surviving the storm through Ayush Shelter” on August 30.

Addressing the press conference, Shri Sonowal said that the Ministry of Ayush has taken the opportunity to enhance its service delivery for the benefit of the masses of the country. He exuded confidence that all state governments will also participate and help the Ministry in its endeavour.

“Ayush has the capacity and wisdom to serve all sections of the society and we will showcase this strength and commitment during this week. And this commitment will continue to be delivered throughout the year,” the Union Ayush Minister said.

Identify, Investigate and Report: The approach to building…

Shri Sonowal said the launch of the cultivation campaign of medicinal plants covering 75,000 hectares of land will ensure the availability of medicines and will be a source of steady income for the farmers. The activity will be implemented through National Medicinal Plants Board. All state medicinal plant boards will be on board to achieve the target. “It will benefit the farmers in a big way,” he said.

The launch of the Y-Break application is one of the most important activities planned by the Ministry of Ayush. The application will be launched from Vigyan Bhawan. The Yoga protocol includes Asanas, Pranayam and Dhyan and is helpful for all workaholics including government and private employees to de-stress, refresh and re-focus with enhanced immunity at their workplaces.

“The Y-Break mobile application has been developed by MDNIY (Morarji Desai National Institute of Yoga). Through this app, yoga and meditation can be done anywhere in just 5 minutes,” the Union Ayush Minister said.

The distribution of Ayush prophylactic medicines with a special focus on the 60plus age group will help the community build the immunity level against the COVID pandemic. There are COVID related protocols issued for different Ayush systems. The ministry will also disseminate the guidelines on diet and lifestyle.

Under ‘AyushAapkeDwar’ programme, saplings will be distrusted to households to promote the concept of growing medicinal plants in the kitchen garden. It will help households to use the medicines from their gardens for common illnesses.

To orient the young minds towards Ayush and help them remain healthy, a series of sensitisation lectures on the Ayush system for higher secondary school students and college students will also be launched during the week and IEC material will be distributed to them.

“Students of different institutions of the country will be made aware about the efforts made by the Ministry of Ayush and we will connect them with AYUSH sectors.”

University of Cambridge: Secret to treating ‘Achilles’ heel’ of alternatives to…

iednewsdesk May 26, 2022
A team of researchers from the UK and Japan has found that the tiny defects which limit the efficiency of…

University of Cambridge: Reducing TV viewing to less than one hour a…

University of York: New hub to empower entrepreneurs and improve…