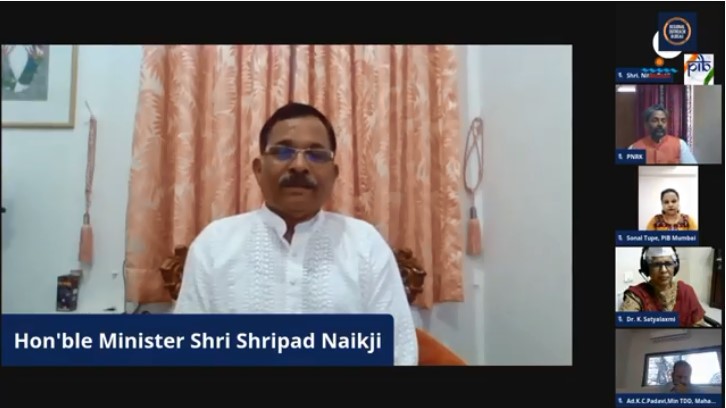 New Delhi: When Mahatma Gandhi’s disciples had approached him to seek his permission for celebrating his Jayanti, Gandhiji directed them to start some constructive work on this day. He himself used to observe ‘maunvrat’ and work on charkha on this day. Later on, after demise of Gandhiji, Vinoba Bhave started observing Gandhi Jayanti as ‘Sut yagya’ which calls everyone to work on the spinning wheel and prepare cotton threads, stated Shri Abhay Narayan Tripathi in course of a webinar jointly organized on Gandhi Jayanti by Regional Outreach Bureau (ROB), Maharashtra and Goa, and Press Regional Bureau, Ministry of Information and Broadcasting and National Institute of Naturopathy (NIN), Pune, today. Speaking on ‘Mahatma Gandhi’s Insights on Health’, the researcher of Gandhian philosophy stated that the Mahatma had educated his disciples and sent across a message of ‘self-purification’- from inside as well as outside. Explaining in details, Shri Tripathi said, majority of the diseases can be cured through exposure to nature. In course of the webinar, Minister of AYUSH Shri Shripad Yesso Naik inaugurated the new unit of NIN to serve the tribal population at Gohe Budruk in Pune virtually.

Speaking on the occasion, AYUSH Minister Shri Shripad Yesso Naik said, the new tribal unit of NIN at scheduled tribal area of Gohe Budruk in Ambegaon Taluk of Pune comes with a 20 bedded facility to provide free clinical services to the tribal population of the area. This apart, there is a training unit focusing on employment and health of tribal youth. This apart, a research unit on tribal practices of health maintenance has also been started. This unit will act as a repository of knowledge base, said the Minister. He said, this unit will work in the areas of education, nutrition and health problems of the tribal population. This tribal unit has been started with cooperation and assistance from the Tribal Development Department, Government of Maharashtra. Shri Naik called for more such collaborative projects in the future.

Throwing light on Gandhi’s thoughts on health, Gandhian Expert Shri Tripathi said, “Gandhiji advocated purification through nature”. Internal purification relating to a change mindset, lifestyle, food habits of a person can be rectified by following 11 principles of Gandhiji which are based on the tenets of non-violence, truth, non-stealing, self-discipline, non-possession, hard work, control of the palate, fearlessness, equality of the religions, use of locally manufactured commodities and abolition of untouchability. He said, diseases can be largely kept away by developing natural habits, consuming naturally sourced food. In Gandhian philosophy “Nature means Almighty”. Hence, the Indian Forest Service Officer-cum- Gandhian expert advised, “First observe nature and figure out how we can live in co-existence with nature. That will automatically solve a lot of problems”. He added, Gandhi was trying to percolate this principles among his disciples and cause ‘manoparivartan’ (change of mindset) in them, which leads to ‘janaparivartan’ (mass movement). When human greed increases, nature comes to play its role by taking its natural course, he cautioned. The ongoing health crisis of COVID-19 is also an example of a fallout between man and nature, he said. The Additional Principal Conservator of Forests in Pune further explained as to how Gandhiji stressed on ‘naturopath’ in freedom movement. This path of nature has been advocated even in the earliest literature of ‘Vedas’ and is of immense significance in the 21st century, he said. Naturopathy can lead us towards a self-reliance or AatmaNirbharta which comes only when we overcome all diseases, further stated the Gandhian expert.