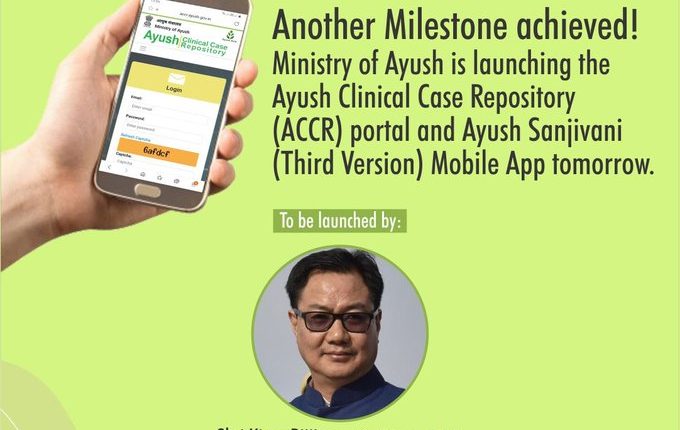 By India Education Diary Bureau Admin On May 27, 2021
Share

New Delhi: Ayush Ministry marked yet another milestone on Thursday by launching its’ Ayush Clinical Case Repository (ACCR) portal and the third version of AyushSanjivani App in a virtual event. Minister of state (IC) for Youth Affairs and Sports and Ayush, Shri Kiren Rijijulaunched the portal as well as the new version of Sanjivani app.

The Ayush minister marked the event as historic and of great importance.Reiterating that Ayush streams are very much scientific Shri Rijiju emphasised that this ACCR portal of successful clinical cases and the Sanjivani App will prove to be critical steps and serve to neutralise the negative voices downplaying the contribution of India’s traditional medicine systems. While lauding the work of Ayush ministry, the Minister said that Ayush ought to keep up the pace with current technology in this fast-changing world. All the rich and scientific health traditions of India will have to harness the potential and offerings of IT. He said that the contribution made by Ayush in Pandemic is tremendous and the ongoing work will be of great contribution to Atmanirbhar Bharat. He also reminded that today’s launch is another landmark after the launch of Namaste portal by the Hon’ble PM a few years ago.

The minister also said that the current debate about Ayurveda versus Allopathy is aggravated by a section of media and is completely unfounded and unnecessary.

On this occasion, Ayush Secretary, Vd. Rajesh Kotecha said that the repository and the upgraded version of Sanjivani app are a part of much larger digital health mission. “With the help of this repository and the app, Ayush will be able to take the scientific work further on AYUSH 64, KabasuraKudaneer etc.”, the Secretary reiterated.

The Ayush Clinical Repository (ACCR) portal (https://accr.ayush.gov.in/) will serve as aplatform to support both Ayush practitioners and general public.

Elaborating the importance of ACCR portal Dr. P Ram Manohar, Research Director, Amrita School of Ayurveda, Amritapuri, Kerala, said that this portal will greatly help in data mining and it will be for the first time that we will come to know how Ayush practitioners have actually responded to Covid-19 pandemic. It will document the strengths of Ayush systems for treatment of various disease conditions.

Working on the behalf of Ayush Ministry at WHO headquarters as Technical Officer in the Traditional Medicine unit, Dr. G. Geethakrishnan, underscored two aspects of this third version of AyushSanjivani App as both the practitioners and the common people would be able to use and contribute through it. He said that the App would help Ayush to present itself more aggressively by utilising the scientific date gained through it. It is noticeable that this version facilitates a significant study/ documentation regarding the efficacy of selected Ayush interventions, including Ayush 64 and KabasuraKudineer medicines in the management of asymptomatic, mild to moderate Covid 19 patients.

West Bengal Higher Secondary examinations will be held by the end of July, Class 10th board exams will be held in the second week of August