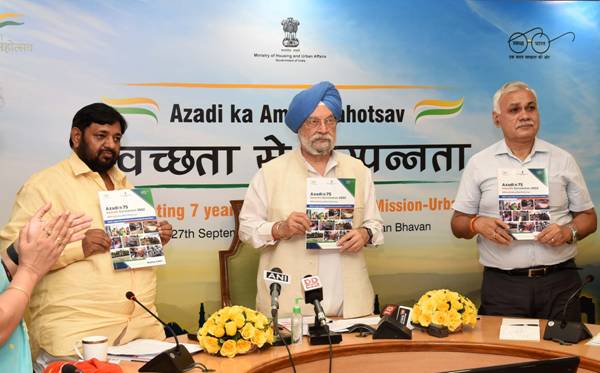 Azaadi@75: Swachh Survekshan 2022 Launched with ‘People First’ at its Core

New Delhi: Hardeep Singh Puri, Minister of Housing and Urban Affairs (MoHUA) launched the seventh consecutive edition of Swachh Survekshan (SS), the world’s largest urban cleanliness survey conducted by Swachh Bharat Mission-Urban (SBM-U) at New Delhi today. Designed with ‘People First’ as its driving philosophy, Swachh Survekshan 2022 is curated towards capturing the initiatives of cities for the overall welfare and well-being of frontline sanitation workers. The survey, flavoured with the Azaadi@75 spirit, will also give priority to the voices of senior citizens and young adults alike and reinforce their participation towards upholding the cleanliness of urban India.

The sudden onset of the pandemic brought with it unprecedented challenges in the areas of public health, sanitation, and waste management. However, what stood out was the indefatigable sense of duty that sanitation workers have displayed to keep urban India safe during this time. In order to recognize and honour the contributions made to the nation by the silent army of sanitation workers, the Government has repledged to focus on their holistic welfare. SS 2022 has incorporated specific indicators that drive cities to improve working conditions and livelihood opportunities for these frontline soldiers in urban India’s sanitation journey.

It is symbolic that the seventh edition of the world’s largest urban sanitation survey coincides with the commencement of the celebrations of the 75th year of India’s independence. In keeping with the theme of Azaadi@75 and to pay tribute to the wisdom of the elderly, SS 2022 will aim to capture feedback from senior citizens as an integral part of the survey. To ensure diversity of voices, SS 2022 will also reach out to young adults who are the future leaders of the country and the Swachhata movement. Additionally, the survey is set to protect India’s ancient legacy and culture by nudging citizens to take ownership and initiative to clean urban India’s monuments and heritage spots.

With this launch, MoHUA also kicks off the week-long celebrations of ‘Azaadi Ka Amrit Mahotsav’. Continuing with its theme of ‘People First’, SBM-U will organize a series of citizen centric activities under the overarching theme of ‘Jan Bhagidari’. During this week, citizens of urban India will participate in a host of focused campaigns to renew their commitment to the cause of cleanliness. Campaigns such as ‘Kachra Alag Karo’ is aimed at reinforcing the practice of source segregation which is the cornerstone of effective waste management. Alongside, in keeping with the theme of ‘Waste to Wealth’, citizen-driven exhibitions will be organized across cities. The week will also see Urban Local Bodies (ULBs) and communities recognize and felicitate citizen leaders, waste entrepreneurs, Resident Welfare Associations (RWAs), non-governmental organizations (NGOs), etc. for driving Swachhata in their surroundings. Special ceremonies will be organized to salute the courage of sanitation workers who have been at the forefront of the efforts against COVID-19. The Mission is also committed to continuously engage with citizens to improve the quality of public sanitation infrastructure and services. To this end, the ‘Sarvajanik Shauchalay Safai Jan Bhagidari Utsav’ will be facilitated to assess the quality of community and public toilets and capture citizen feedback for process improvement in future.

Introduced by MoHUA in 2016 to rank cities on cleanliness parameters in 73 cities, Swachh Survekshan today has become the world’s largest urban cleanliness survey covering over 4,000 ULBs. The Survekshan framework has evolved with the years and has today become a unique management tool that accelerates ground level implementation to achieve sanitation outcomes. The fact that the last edition of the survey SS 2021 was conducted in record time despite the on-ground challenges posed by the pandemic and received over 5 crore citizen feedback is once again testimony to the ownership of citizens towards the goal of ‘Sampoorna Swachhata’. Cities are now eagerly awaiting the results for the same which shall be announced shortly by the Ministry.

This year’s Survekshan is committed to creating a level playing field for smaller cities by introducing two population categories under 15K and between 15-25K. To further expand the Survekshan footprint, district rankings have been introduced for the first time. The scope of the survey has been expanded to now cover 100% wards for sampling, as compared to 40% in previous years. In order to seamlessly carry out this ambitious exercise, SS 2022 will see more than twice the number of assessors deployed last year for the on-field assessment. In keeping with Hon’ble Prime Minister’s vision of a Digital India, the upcoming edition of Survekshan shall usher in improved technological interventions such as digital tracking of documents, geo-tagging of sanitation and waste management of facilities for better efficiency, and QR code-based citizens’ feedback for increased people outreach. Through these multi-faceted initiatives, the SS 2022 framework will propel the Mission towards a circular economy approach through optimum resource recovery.

Speaking at the occasion, Mr. Puri said that Swachh Bharat Mission is an important and transformative programme of the country which has achieved success due to involvement of all stakeholders at the grassroot level. He said that Honorable Prime Minister is the catalyst for converting the vision of the Mahatma Gandhi into reality by leading from front and converting it into a peoples’ movement. The Minister said that the road to this success was not easy but today we have not only achieved ODF but also succeeded in solid Waste Management. Crores of Indian citizens are associated with movement and it is gaining from strength to strength. The Minister said that Swachh Bharat Mission 2.0 and AMRUT 2.0 will be launched by the Hon’ble Prime Minister on 1st of October. He expressed confidence that after SBM 2.0 our cities will rank among the best in the world.

MoS, MoHUA, Shri Kaushal Kishore said that Swachh Bharat Mission got people’s support and created awareness among the people. The cleanliness brought about by the Mission helped the country face the Pandemic successfully. He said the Safai Karamcharies acted as corona warriors and the Government also took care of their interest. The Minister called upon citizens to whole- heartedly participate in all the initiatives and discharge their duties sincerely.

Along with SS 2022’s launch, MoHUA also released a coffee table book titled ‘A Change of Heart’ that features inspirational stories of individuals and communities and stand witness to the significant impact of people’s will and commitment to drive change in urban India’s cleanliness chapter. A short film, ‘Swachhata Se Samriddhi’ that showcases the milestones of the last seven years in the Swachhata journey was also released on the occasion.

Along with SS 2022, MoHUA also flagged off the field assessments for the Safaimitra Suraksha Challenge launched a year ago. Once again, the Challenge is another initiative by MoHUA to empower sewer and septic tank cleaners whose occupation consists of battling against several safety concerns on a daily basis. The Challenge aims to help move cities towards mechanization of sewers and septic tank cleaning operations along with making provisions for personal protective equipment (PPE) and safety kits for workers in case of manual entry under unavoidable circumstances. In the course of one year, this exercise has enabled the capacity building of over 8,500 Safaimitras, in partnership with the National Safai Karmacharis Finance and Development Corporation and Sector Skill Council for Green Jobs and has also facilitated their financial empowerment by disbursing over ₹8.51 crores worth of loan to Safaimitras for the purchase of cleaning equipment.

The day also saw the launch of the revamped version of the Swachhata App, the digital sanitation grievance redressal platform by MoHUA introduced in 2016 and has reinvented the way in which citizen grievance redressal is managed. The App has resolved over 2 crore citizen complaints till date with active engagement from citizens. This new version will take citizen engagement to the next level by enabling people to identify yellow (public urination) spots, search for and rate the service levels in public toilets and validate their city’s progress in reducing garbage vulnerable points & access to public sanitation facilities.

The event was webcasted live and attended by over 1,000 State and city level officials and sector partners. The program was attended by Shri Kaushal Kishore, Minister of State, MoHUA, Shri Durga Shanker Mishra, Secretary, MoHUA, and other senior officers of the central and State Governments, and other stakeholders.

Over the last seven years, the Mission has reached all corners of the country and has changed the lives of countless citizens with its ‘people first’ focus. The Mission has revolutionized the sanitation space in urban India by building over 70 lakh household, community and public toilets. The Mission has prioritized the needs of women, transgender communities, and persons with disabilities (Divyangs). Taking the journey forward, the Mission is moving on the path of sustainable sanitation with over 3,000 cities and over 950 cities being certified ODF+ and ODF++ respectively. Cities are also progressing towards Water+ certification which entails treatment of wastewater and its optimum reuse. The thrust on scientific waste management is evident with waste processing in India going up by over four times from 18% in 2014 to 70% today. This has been aided through 100% door-to-door waste collection in 97% wards and source segregation of waste being practised by citizens in letter and spirit across 85% wards. More importantly, the Mission has been able to bring about a marked difference in the lives of sanitation workers and informal waste workers. The active participation of 20 crore citizens (comprising over 50% of India’s urban population) in the program has successfully transformed the Mission into a people’s movement, a true Jan Andolan. The launch of SS 2022 has set the stage for the launch of the next phase of the Mission with “People First’ as its guiding principle.