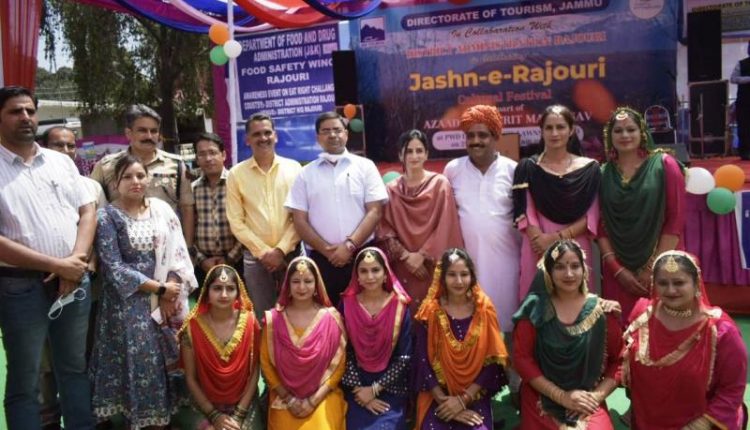 The event has been organised to promote the local culture and boost tourist footfall in the Rajouri district and the first day of the programme was organised here on the lawn of the PWD Dakbunglow Rajouri.

The local artists as well as the artists from outside of the UT including Himachal Pradesh, Kashmir, Ramban, Doda, Reasi, Jammu, Ramban, Punjab, Haryana, Kathua and Jammu participated in the event.

The cultural troupes enthralled the audience with their performance which was appreciated by the audience amid thundering applause. Regional and state cultural level events were also displayed. Mostly Gojri, Pahari, Kashmiri, Dogri and Gaddi languages were promoted in the programme.

Special cultural item in the form of skits on Nasha Mukt Bharat Abhiyan was also performed during the event besides an oath to make the district free from drug menace was also administered to all the participants.

Assistant Commissioner Food Safety delivered a lecture on the Eat and Right campaign and the public was made aware of various aspects of the campaign. A nukkad Natak was also presented on the theme Eight Right campaign.

The artists also raised awareness on COVID Appropriate Behaviour and the public was urged to follow all the safety measures to avoid the risk of Coronavirus infection.

In his address during the event, the Deputy Commissioner emphasised the importance of the preservation of the cultural identity of an area and said that in addition to its intrinsic value, culture provides important social and economic benefits and it also enhances our quality of life and increases overall well-being for both individuals and communities

The Deputy Commissioner also said that these cultural fests help to create the district its own identity on the cultural front and also help local artists to interact with their fraternity from other States.

The Deputy Commissioner further said that such events would continue to be organised in future to boost tourism and local culture; he added that the exchange of ideas will play an important role in developing better artists.

The Deputy Commissioner said believing in continuity and consistency, this is the second mega event organised by the district administration. He said more such functions would be held in near future especially in peripheral areas of the district.

The Deputy Commissioner also inspected the stalls which were set up by the Departments to showcase the activities being carried out in the district.

The audience and the locals, in general, hailed the initiative and efforts jointly undertaken by the District Administration and Tourism Department and observed that this step will encourage tourist footfall and exchange of rich cultural heritage in the district.

It is pertinent to mention here that as per the schedule of activities being organised by the district administration, a day-long Mushaira will be organised tomorrow at the BGSBU auditorium Rajouri