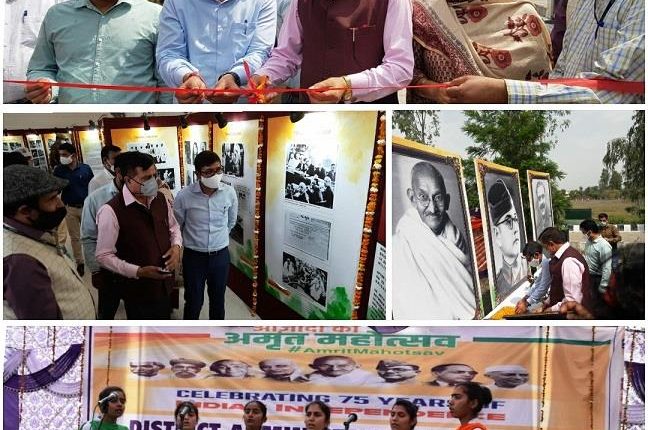 The cultural events started with offering of floral tribute to the freedom fighters, followed by ‘Saraswati Vandana’ and lighting of traditional lamp by the Chief Guest and other dignitaries.

Speaking on the occasion, the DDC Chairman Mahan Singh said the ‘Azadi Ka Amrut Mahotsav’ is a great opportunity to learn the spirit of nationalism from the rich contribution of our freedom fighters. He said youth must inspire themselves from the glorious Indian freedom saga which depicts the rich heritage of unity and coexistence.

Deputy Commissioner, Rahul Yadav said the motive behind the ‘Azadi Ka Amrut Mahotsav’ programme was to instill the spirit of nationalism among the people and to look for innovative ideas of development to make India lot more progressive, socially and economically. He further informed that district administration is going to launch a drive to educate stakeholders about achievements of different departments in coming weeks. He appealed the people to visit the venue of 5 days ‘Photo Exhibition’ and witness events such as Beti Bachao Beti Padhao Rally, Cycle Rally, Marathon, and Poster making Competition etc to be held in the next four days.

The chief guest also gave away trophies to the participants.

Pertinently, the ‘Azadi ka Amrut Mahotsav’ is being celebrated to mark the celebrations of 75 years of Independence of India under which nationwide launch of activities were inaugurated by the Prime Minister on March 12, 2021.