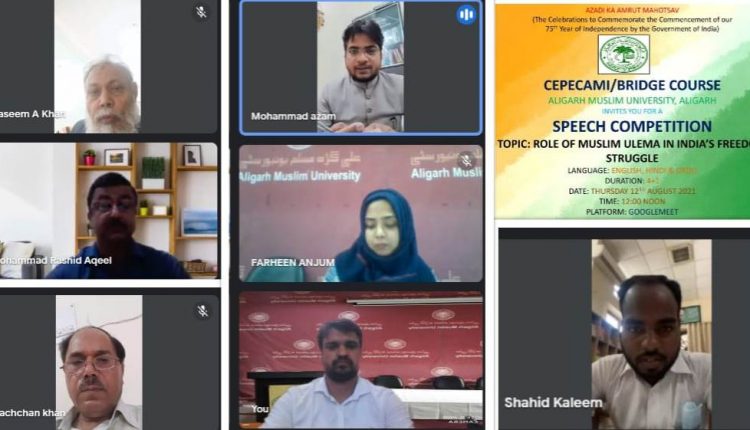 Saheema Khatoon bagged the first prize of the essay competition on ‘Role of Scholars in the Freedom Struggle of India’. Arzaul Haque and Asiya Khanam secured second and third positions respectively.

In the presidential address, Naseem Ahmed Khan (Director, CEPECAMI) said: “Since the independence, our Country has progressed at a faster pace. The nation has been growing economically and socially. If the freedom fighters had not contributed in the Freedom struggle, the current situation of the country would have been different. We are independent and free today only because of the efforts and sacrifices made by our Country’s Freedom Fighters”.

He also discussed on the contribution of women Freedom Fighters.

Zolve Launches a New Scholarship Program for students to…

Bacchan Ali Khan (Assistant Director, CEPECAMI) spoke on the contribution of CEPECAMI in educational and cultural advancement of Indian Muslims.

Dr Md Khursheed Alam conducted the program and Dr Farheen Anjum extended the vote of thanks.

Meanwhile, a unique patriotic composition of the National Anthem symbolizing and evoking eulogies of the Indian history and traditions was sung by the faculty members, students and staff of the Department of Library and Information Science to mark the ‘Azadi Ka Amrut Mahotsav’.

The programme was observed offline and through online platforms in line with Prime Minister, Shri Narendra Modi’s wish to create a ‘Rashtra Gaan’ record by getting maximum number of people to sing the National Anthem, said Prof Nishat Fatima (Chairperson, Department of Department of Library and Information Science).

New members on the Board of Secondary and Senior Secondary Education

The Design Village (TDV) Announce Scholarship of 1.5 Crore for Students

Zolve Launches a New Scholarship Program for students to study in the U.S.

Avtar Sets on a Mission to transform 1,00,000 companies to Equitable Workspaces

University of Tokyo: Supernumerary virtual robotic arms can feel like…

RMIT: Researchers step back in time in search of a more sustainable…