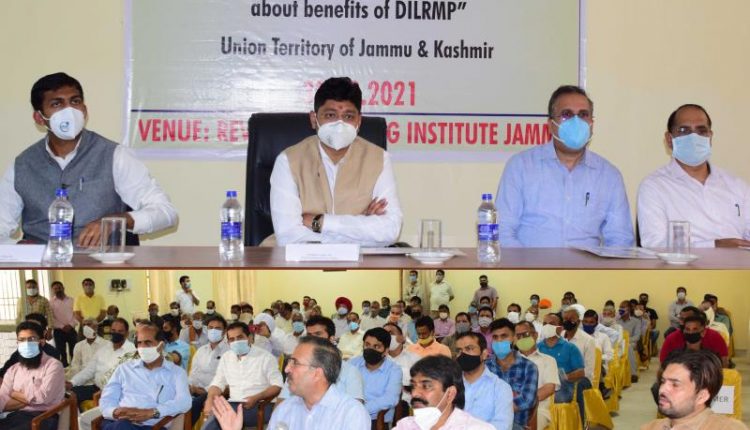 A detailed presentation was given by Regional Director Surveys & Land Records, Dr. Mushtaq Ahmad through which the farmers were informed about the Digital India Land Records Modernization Programme, (DILRMP) under which, an Integrated Land Information Management System is being developed across the country, which includes geo-mapping of land and digitization of revenue records. The Programme is being implemented by Jammu & Kashmir Land Record Management Agency, JaKLaRMA- a nodal agency of the Revenue Department.

Addressing the farmers, the Divisional Commissioner said that digitization initiative of the government would streamline revenue services and a number of problems which were earlier faced by the public would be eliminated. He informed that half the job of digitization of jamabandis, of 950 revenue villages of Jammu has been done and all Deputy Commissioners have been directed to finish the job at the earliest in the entire division.

The Divisional Commissioner informed the gathering that post digitization, all land records would be made available in Hindi and English, in addition to Urdu. He said that the move would facilitate a large section of the public not versed with Urdu.

Further appreciating the initiatives, the Div Com said that public would herald an era of transparency and accountability as anybody from the public would be able to view ones land records from anywhere any time. He added that the phasing out of manual methods in favour of digital devices and satellite imagery would provide increased accuracy in measurement. ‘It is the government’s intent to eliminate errors, remove confusion and ensure that no land record goes missing’, he concluded.

Under the subsequent phase, digitization of updated jamabandis, vectorisation of serving Cadastral Maps from scanned data, installation of sehada stones/ tertiary points in remaining 18 districts, establishment of continuously operating reference stations (CORS) network for survey/re-survey using CORS Net Based GNSS technology with DGPS equipments in all 20 districts, preparation of updated DGPS Cadastral Maps after survey/ re-survey of all 6850 villages and integration of record of rights (RORs) with maps is to be done.

Principal Revenue Training Institute Jammu, Kusum Sharma and other staff of the department among a number of farmers were also present at the occasion.