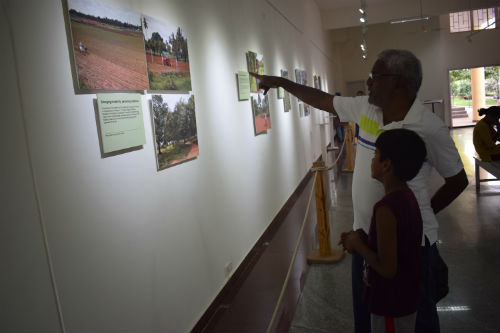 Bengaluru: Azim Premji University hosted a photo-exhibition titled ‘The City and the Farms-agriculture in periurban Bengaluru’ on September 15, 16 and 17, 2017 at Vismaya Hall, Rangoli Metro Art Centre, M.G. Road, Bangalore. The exhibition showcased multiple narratives around unruly urban sprawl engulfing agricultural peripheries of Bangalore.
Around 550 people visited the exhibition over the three days. For the urban residents of Bangalore the exhibition served as an eye-opener on the unintended impacts of their consumption choices on farms and farming communities in city’s peripheries.

Rashmi Shanbhag who viewed the exhibition with her 5 year old daughter was happy that the photos evoked the curiosity of her child on plants, animals and crops and the importance of having them around. She felt the need of incorporating agricultural sustainability aspects in school curriculum.

Around 20 stories with 50 photographs and videos spanning the above mentioned themes were displayed in the exhibition. The stories and narratives poignantly conveyed the havoc wreaked by unbridled urban expansion over the last two decades. Fertile agricultural land turning into industrial, residential, infrastructural and commercial construction, shrinking ecological commons including gomalas (grazing lands), changes in crops and agricultural practices, impact of polluted water resources, and transitions in the economic, social and cultural fabric of communities inhabiting the rural-urban interface were portrayed in the exhibition.

These photo-stories are contributed by researchers and practitioners from India and abroad who have been looking into the dynamics and consequences of agricultural transitions in peri-urban Bangalore through diverse disciplinary lenses and seeking to address some of the challenges associated with peri-urban agrarian livelihoods.

Can seed innovation save the marginal Indian farmer?