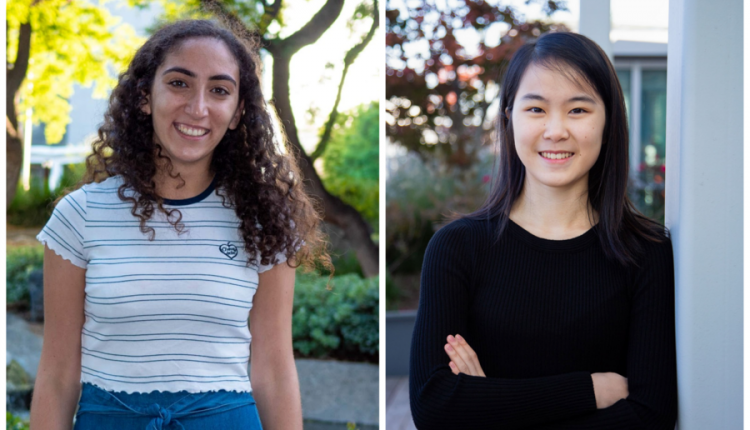 Rigorous selection process for the prestigious fellowship took into account students’ outstanding track record of scientific achievement and inquiry, as well as contributions to the STEM community.

MIT PhD students Aziza Almanakly and Belinda Li have been selected as the Department of Electrical Engineering and Computer Science (EECS) recipients of the multi-year Clare Boothe Luce Graduate Fellowship for Women, an honor designed to encourage and support graduate women in STEM. The rigorous selection process for this prestigious fellowship took into account the two students’ outstanding track record of scientific achievement and inquiry, as well as their contributions to the STEM community.

Importantly, the fellowships represent the culmination of an intensive effort on the part of both the Institute and the EECS department. Upon MIT’s selection by the Clare Boothe Luce Program for Women in STEM to submit a full proposal, EECS entered the MIT internal competition and was selected to submit a full application on behalf of the Institute to the national competition held by the Henry Luce Foundation. Funds from the Luce Foundation, combined with cost-sharing funds from EECS, will provide full financial support for a period of two years for Almanakly and Li.

“These fellowships are a powerful assertion of institutional support for women in STEM,” says Professor Asu Ozdaglar, head of EECS. “Our dedication to supporting women in STEM extends far beyond attracting top candidates to our program; we are committed to providing continued, concrete support to their research careers once they arrive at MIT.” Both Almanakly and Li will be deferring the start of their CBL Graduate Fellowships until they complete their current fellowship awards; the two recipients are already capturing attention in the red-hot technical fields of quantum computing and language modeling.

A rising second-year PhD candidate advised by Professor Will Oliver, Aziza Almanakly conducts research on waveguide quantum electrodynamics and microwave quantum optics with superconducting qubits. Within the first nine months of her time at MIT, Almanakly successfully demonstrated controlled, directional generation of single microwave photons on a new qubit chip of her own design — a novel accomplishment, and an indicator of her exceptional talent. Of Almanakly’s work, Oliver says, “Her success is rooted in a combination of raw talent, strong intuition, perseverance, and a strong desire to improve herself, her research, her workplace, and the lives of those around her. I have absolutely no doubt that Aziza will succeed in her research, and I fully expect she will become a future leader in science and technology.” As part of her personal commitment to passing on the mentorship and encouragement she has received, Almanakly teaches the fundamentals of quantum computing to underrepresented high school students through IBM Quantum and the Coding School. Prior to her arrival at MIT, Almanakly conducted research at New York University, Caltech, the City University of New York, and Princeton University. Among other honors, Almanakly has won the P.D. Soros Fellowship for New Americans.

A rising second-year PhD candidate advised by Professor Jacob Andreas, Belinda Li conducts research on language models and natural language processing. Li’s interest in language models and natural language processing was fueled by a year spent working with the AI Integrity team within the Facebook AI Applied Research group, in which she worked on building automated detectors for hate speech and misinformation. Of her work, Li says, “I am interested in interrogating the relationship between language models (LMs) and the knowledge they encode: what exactly do LMs know about the external world? And how can we expand their ability to learn and utilize such knowledge in a systematic way? More fundamentally, what is the relationship between language/language technologies, and the broader society?” Li’s ambitious research goals have taken her far within her first year at MIT. Her advisor Andreas reports: “Despite starting this year [during the pandemic], Belinda has already made significant discoveries about the organization of information in machine learning models trained for language processing tasks … In the six months she’s been here, Belinda has basically started running a mini-lab of her own.” Additionally, Li has taken on the responsibility of mentoring underrepresented undergrads through MIT EECS’s GAAP program. Among many other awards, Li has been named a recipient of the Ida M. Green Memorial Fellowship, the National Science Foundation Graduate Research Fellowship, and the National Defense Science and Engineering Graduate Fellowship.

Established by the prominent American journalist, playwright, ambassador, and Congresswoman Clare Boothe Luce, the CBL Program for Women in STEM was created “to encourage women to enter, study, graduate, and teach” in areas in which they continue to be underrepresented, including science, mathematics, and engineering. To date, the program has supported more than 2,800 women at the undergraduate, graduate, and beginning tenure-track faculty stages, making the CBL program the single most significant source of private support for women in science, mathematics, and engineering in higher education in the United States.

GIFT-IFSC poised to emerge as a leading fund destination for both Indian and foreign centric funds: Executive Director, IFSCA