Bandicoots return to Sturt National Park after more than a century

The locally extinct animals have been reintroduced to the NSW outback as part of a major rewilding project led by UNSW Sydney.

Locally extinct bandicoots have returned to Sturt National Park after more than 100 years.

The nationally threatened species – known by local Aboriginal people as ‘talpero’ – once ranged across inland Australia, including the area now managed as Sturt National Park. The small, native marsupials became extinct in the region after ecosystem changes caused by rabbits and predation by feral cats and foxes.

Now, a founding population of talpero have been reintroduced to the area by the team at Wild Deserts, a collaboration led by UNSW Sydney ecologists and Ecological Horizons with the National Parks and Wildlife Service of the NSW Department of Planning, Industry and Environment and Taronga Conservation Society Australia.

Their reintroduction is another major milestone in the Wild Deserts conservation project, which last year reintroduced bilbies and mulgaras into the national park.

“The season has been tremendous out here with the rains we had last year and then again in March,” says UNSW’s Dr Rebecca West, an ecologist based at Wild Deserts.

“These rains have helped create a highly productive system that is excellent for the reintroduction of this species.”

Up until recently, western barred bandicoots were considered one species with five subspecies, but this has recently split into five species. Only the Shark Bay species – the species translocated to Sturt National Park – survived. UNSW scientists acknowledge this important taxonomic work.

This remaining species has been moved to two islands and three fenced locations. The Wild Deserts conservation reintroduction came from one of these, a self-sustaining population at Arid Recovery near Roxby Downs.

Supported by governments because of their conservation value, the Wild Deserts conservation reintroduction recognises the important role that this species complex played in ecological function, important for restoring desert ecosystems. 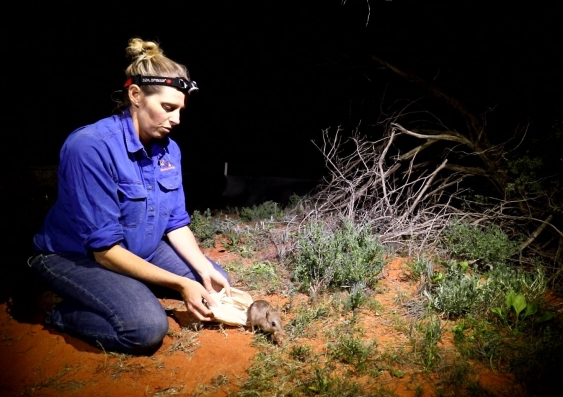 The Wild Deserts team introduced 10 talpero to the park as a founding population, but they hope to add more characters to the mix soon. Photo: UNSW Sydney.

The Wild Deserts team eradicated every last rabbit, cat and fox from two 2000 hectare feral-proof fenced exclosures within Sturt National Park, creating one of the largest feral-animal-free areas in Australia.

These exclosures in the wild work as ‘training zones’, where reintroduced vulnerable species can learn to live in the wild without dangers from predators like cats and foxes.

When their populations start thriving, the animals will be released into a second training area with predators, where they will learn to become predator-smart.

The ultimate project aim is to release a smarter generation of bandicoots and other locally extinct mammals back into the wild.

NSW Environment Minister Matt Kean says: “The reintroduction of this important species to the Corner Country in Sturt National Park is another huge step in our battle to halt and reverse the tide of mammal extinctions.

“Our aim is to re-establish ecosystems as they were before feral cats, foxes and rabbits wreaked havoc on Australian native wildlife.”

Talpero are the smallest members of the bandicoot family, roughly the size of a guinea pig. They can be distinguished from other bandicoots by their fawn-coloured coat with pale stripes across their rump.

The nocturnal marsupials dig for their food in sandy environments, making foraging pits to find seeds, tubers, insects and fungi. This process turns the soil and helps it catch water and nutrients, contributing to the overall health of the ecosystem.

The Wild Deserts team have introduced 10 talpero as a founding population, but they hope to add more members soon.

“If they keep doing as well as they are, then I think we will be able to add some more characters to the mix,” says Dr West.

“Hopefully that will re-establish bandicoots back into Sturt National Park into the future.” 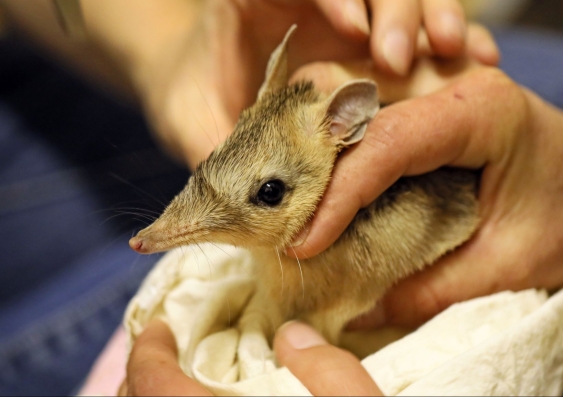 The ultimate aim of the project is to release a smarter generation of bandicoots and other locally extinct mammals back into the wild. Photo: UNSW Sydney.

The founding talpero population are from Arid Recovery, an independent not-for-profit conservation and research project that manages a large feral-free safe haven near Roxby Downs in South Australia.

The marsupials were released into Wild Deserts’ southern exclosure, called ‘Mingku’ – named after the word meaning happy in the Maljangapa language. The talpero joined two other recently reintroduced species, the bilbies and mulgaras.

“This is an important step in restoring this desert ecosystem,” says Professor Richard Kingsford, leader of the Wild Deserts project and director of the UNSW Centre for Ecosystem Science.

“We are already starting to see the beginnings of a transformation occurring in the landscape. The soil is starting to turn over, which gives great opportunities for lots of little invertebrates and catches water and nutrients.

“We think that’s part of how we can transform these deserts back into what they were.”

Dr John Read from Ecological Horizons, a major partner of the Wild Deserts project, says “These energetic little diggers at Wild Deserts are important culturally, historically and ecologically and will be great for restoring the desert.”

The Wild Deserts scientists will check in on the animals daily using radio tracking devices to ensure they’re adapting well to their new environment.

“We hope to establish talpero in other parts of the Wild Deserts site – and ultimately into neighbouring areas of Sturt National Park or beyond. We have already recorded recruitment of young that were translocated in pouch and other young that were born at Wild Deserts.”

Wild Deserts is part of a major NSW Government initiative to protect threatened native mammals via the Reintroduction of Locally Extinct Mammals project and the Saving our Species initiative.

Next, the team plan to reintroduce other threatened mammals into the Wild Deserts exclosures, including western quolls, stick-nest rats and golden bandicoots.