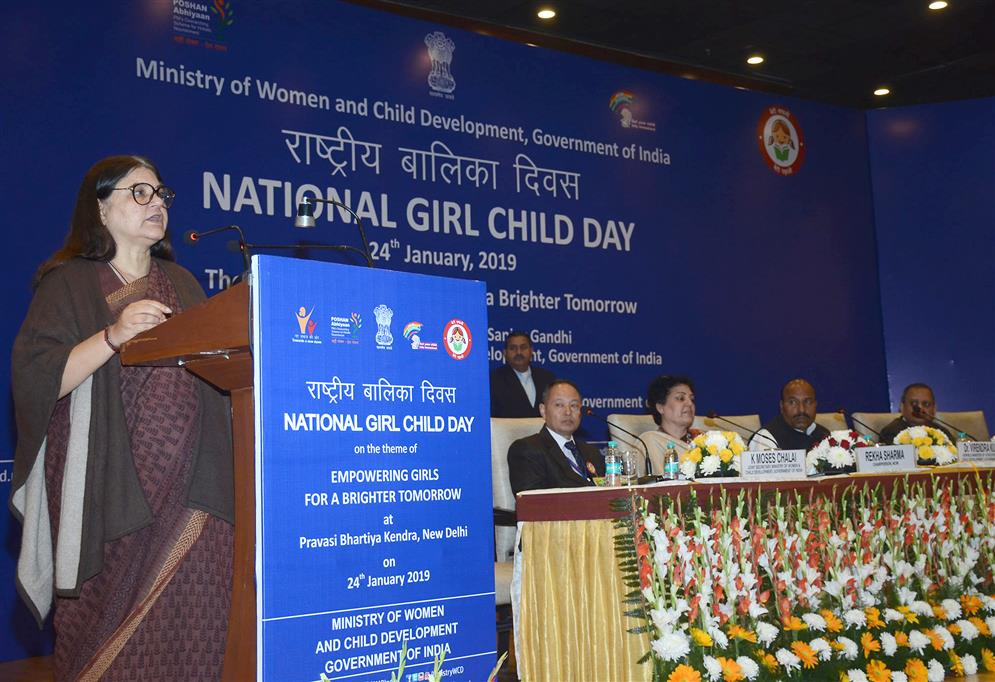 BBBP is one of the most successful programmes of the Government: Smt Maneka Sanjay Gandhi

New Delhi: The Women & Child Development Ministry celebrated National Girl Child Day (NGCD) today 24th January, 2019 at Pravasi Bharti Kendra, Chankyapuri, New Delhi. The celebrations also marked the anniversary of Beti Bachao Beti Padhao (BBBP) Scheme. The theme of this NGCD is “Empowering Girls for a Brighter Tomorrow” and celebrating with objectives of generating awareness on the issue of declining Child Sex Ratio (CSR) and create a positive environment around valuing the girl child. Smt. Maneka Sanjay Gandhi, Union Minister for Ministry of WCD was the Chief Guest and Minister of State, Dr. Virendra Kumar was the Guest of Honour for the event. Ms. Kavita Jain, Haryana Minister for Women and Child Development among other dignitaries were also present.

Congratulating the award winning States & Districts on the occasion, Smt Maneka Sanjay Gandhi said that in the last four years, the Ministry has managed to change the mindset of people towards girl child. Enumerating girl child centric measures taken by the Government, she said with combined efforts of States and Centre the Ministry has been successful in implementing One Stop Centres, Panic Button, measures of cancelling passports of NRI marriages, Sexual Harassment of Women at Work Place etc. She thanked the efforts of all the stakeholders in making it possible. Beti Bachao Beti Padhao has been one of the most successful programmes of the Government, the Minister added.

Secretary WCD, Shri Rakesh Srivastav highlighted the achievements under BBBP and steps being taken for all round development of the girl child.

A booklet on “Innovations under BBBP” was also released on the occasion. The Ministry has compiled 38 Innovative Activities from Districts across the country to set an example for other Districts. These interventions have been categorized according to five themes, which are Survival, Protection, Education, Participation and Valuing Girls.

The occasion was also marked by felicitation of the 5 States and 25 Districts under the Beti Bachao Beti Padhao (BBBP) scheme for their exemplary performance. The following States/Districts have been felicitated under the categories as mentioned below:-

Drinking Water for More Than Three Million Residents of…

The event culminated by an enlightening cultural programme performed by professional Pantomime group.