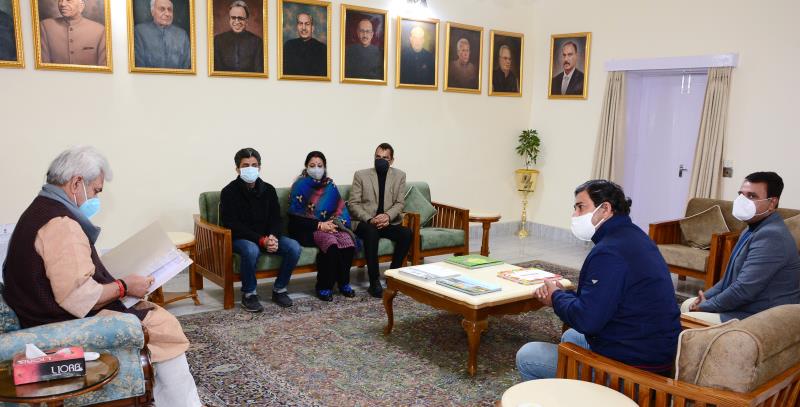 A deputation led by Chairman Block Development Council Mandi Poonch, Sh Shamim Ahmed Ganai called on Lt Governor and submitted a memorandum of issues and demands pertaining to shortage of Doctors in SDH Mandi, civic issues including better drainage, electricity and road facilities, development of tourism and sports infrastructure in the area, besides clearing liabilities of works done under MGNREGA, PMAY and SBM.

On the occasion, Lt Governor while interacting with the deputation gave a patient hearing and assured the visiting deputation that all the genuine demands would be looked into earnestly for their redressal on merit.

A deputation of Himalayan Buddhist Cultural Society Paddar led by its general secretary, Dr. Nawang Tundup submitted a memorandum of several demands pertaining to relaxation in physical standard in recently advertised CCE posts with regard to JKPS (Gazetted) for Buddhist community of J&K on pattern of Ladakhi and Gorkha communities. Besides, the visiting deputation requested the Lt Governor for creation of Bhoti language teacher and lecturer posts in all Government Schools from middle to higher secondary levels.

On the occasion, Lt Governor assured the deputation that the UT government is committed for the overall development of every section of the society, including the Buddhist community of J&K.

Similarly, a deputation led by Lt Colonel (Rtd) PS Raina apprised the Lt Governor about issues related to the land acquisition and rehabilitation in the expansion process of Jammu Airport.

To this, Lt Governor assured the visiting deputation of all possible assistance from the government for rehabilitation and welfare of the families.

A deputation of Sher-e-Kashmir University of Agricultural Sciences & Technology Teachers Association Jammu (SKUAST-TAJ) led by its president Dr. Vikas Sharma also called on Lt Governor and apprised him about various issues concerned with the welfare of teaching fraternity and overall development of the varsity.

Speaking on the occasion, Lt Governor, who is also Chancellor of SKUAST-J, assured all the necessary support to the varsity and hoped that the association would work for the betterment of teaching fraternity which would eventually achieve academic, research, and extension excellence in near future.

A deputation of School Education Officers’ Association (ZEO Cadre) led by its president Kuldeep Singh Langeh also presented their pressing issues before the Lt Governor who assured the redressal of their genuine issues on merit.