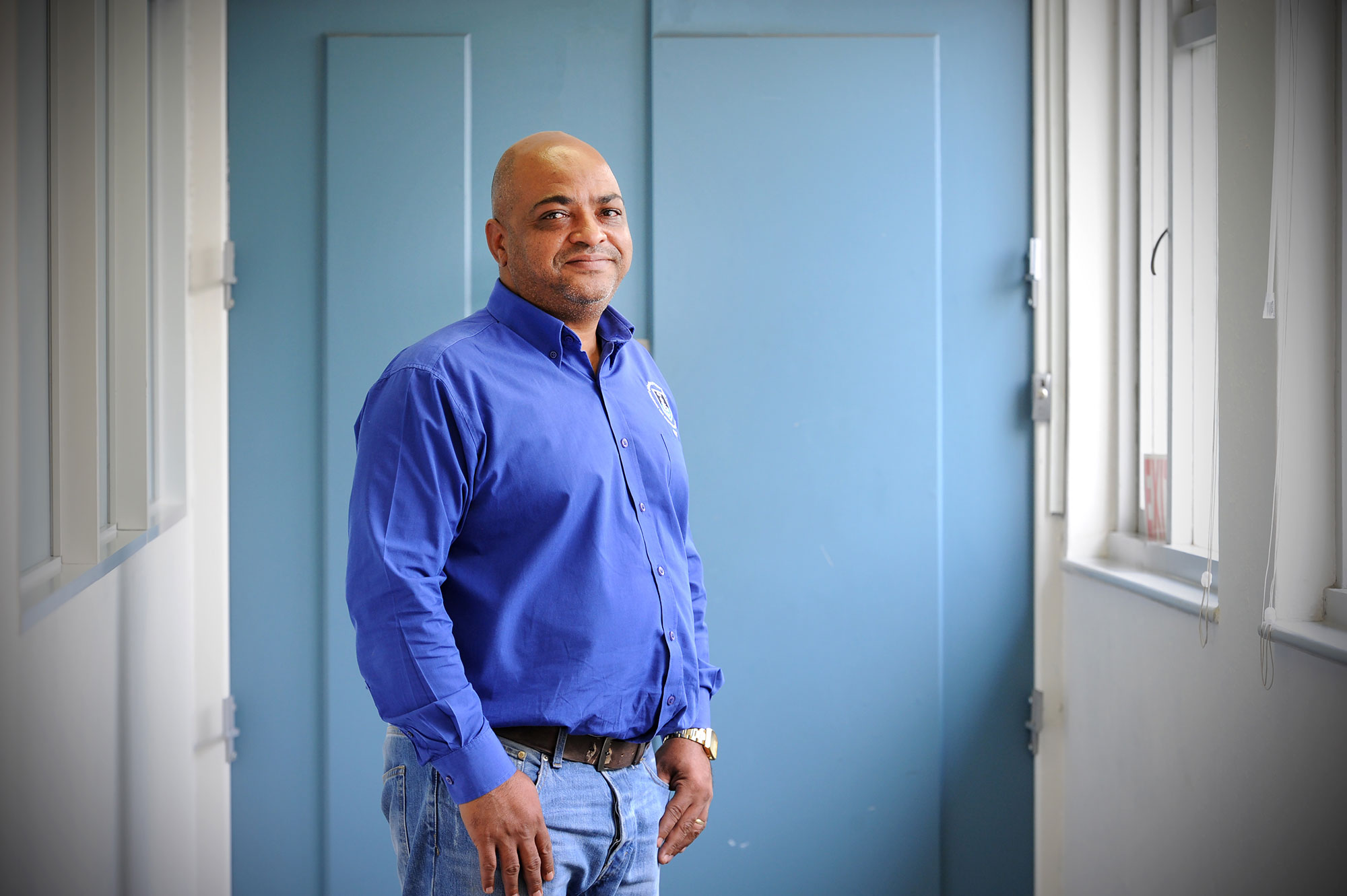 Bernard Soules’ 25 years of service at UCT have contributed to keeping the campuses and campus communities safe and secure.

Maintaining a safe and secure campus and community takes more than roving security personnel, said Campus Protection Services’ (CPS) Bernard Soules, who is one of the 225 staff being honoured with Long Service Awards this month. Soules said he has witnessed huge changes during his two and a half decades with the University of Cape Town’s (UCT) protection services.

Soules started his first job in security with Security Action Services in September 1991. Those inclined to superstition may have balked at starting a new job on Friday the 13th, but not Soules. It became a platform to bigger things.

Four years later, he joined Gray Security Services (GSS), and between 1995 and 2000 he worked at various client premises and was rewarded with a promotion to area supervisor. In 2000 UCT’s security section was outsourced, which was part of former vice-chancellor Dr Mamphela Ramphele’s plan to outsource all non-core services and functions.

On 1 December 2000 GSS was awarded the contract to provide security services at UCT’s main and satellite campuses. Soules was deployed to UCT.

It was to become his working home.

A ware Kaapenaar (real Capetonian), Soules grew up in Parkwood Estate on the Cape Flats, the eldest of five children. In 1995 he married the love of his life, Anthea, and they have two children, Winston and Bernicia. It’s still a close extended family even though the matriarch, his mother, Francis, died in 2008.

He completed high school in Grassy Park. Soules said that the area he grew up in was known for gangsterism.

“And at times one was labelled for where you came from.”

“I believe one needs to be very committed and passionate to do the work I do.”

But the young Soules had greater ambitions: to become a lawyer or a carpenter.

“Unfortunately, these options did not materialise, and I chose what I love doing today. Many might say I was crazy: Why would one want to do this type of work? I believe one needs to be very committed and passionate to do the work I do.”

A career in security is not what it used to be, with the “bobby on the beat” patrolling streets and neighbourhoods. The nature of crime has changed in the country, and industry needs to keep up and remain one step ahead, he said.

“When we started on 1 December 2000, I was a shift supervisor working the day shift. I was responsible for ensuring we maintained a safe campus with the allocated manpower. I was very excited [and] at the same time a little overwhelmed, nervous and scared to a point, as this was a first for all of us at Gray Security,” he said.

From the start, UCT’s heritage status proved to be a challenge, said Soules. Heritage sites are open, which provides a porous environment and easy infiltration for anyone with criminal intent.

“As the service provider at the time, we had to come up with a strategic plan to ensure the safety of staff and students – and this was the exciting part as no day has ever been the same at our university.”

On 1 October 2006 Soules was promoted to manager, responsible for all security operations across campus. In 2016, after he was insourced along with some 1 000 other service staff, his role within CPS became more strategic in dealing with events, complaints and CCTV.

An important part of his function has been to maintain open and good relations with UCT’s surrounding community, the community improvement districts from Wynberg to central Cape Town and law enforcement agencies.

He is currently the chairperson for the Rondebosch Community Policing Forum and serves on the Mowbray and Woodstock policing forums.

“These relationships are important as they really assist in maintaining a safe space on the fringes of campus.”

Much of his work is done out of sight, ensuring his staff who interact with staff, students and visitors daily maintain high standards of practice.

There have been times of action and high adrenaline when Soules and his team have chased down and arrested criminals who’d committed crimes against UCT’s staff and students.

But the most memorable was the day UCT announced that all services would be insourced.

“I saw that as a life-changing decision; it changed life for me and my family for the better.”

“I saw that as a life-changing decision; it changed life for me and my family for the better.”

Other highlights are wrapped up in how the campus has changed geographically.

“I still remember middle campus with the tennis courts and walkways. Now two new buildings, Masingene and the School of Economics, have totally changed the look of the area – for the better.

“The shuttle area on lower campus, what we called a ‘taxi rank’, has now changed into a proper shuttle operation after the new shuttles were introduced around 2006/7.”

There have been lowlights and disappointments, which he doesn’t want to dwell on. The Rhodes Must Fall and Fees Must Fall student-led protests gave him a different perspective of dynamics on campus.

“The protest period was very challenging for me personally.”

“The use of technology has become popular in our department, and we’ve already started seeing the result, both on campus and on the fringes of campus,” said Soules. “Our collaborative relation with our partners and some members of the community has also changed, and because of this we’ve seen several success stories.

“For me these past 25 years of my career working at our beloved institution have been the best.”

“Over the years we’ve seen how the types of crimes committed have changed and how sophisticated criminals have become. Having an open campus will remain a challenge to UCT’s security teams as long we don’t have full control [over] who comes onto our campuses.”

It has been a largely fruitful and happy 25 years, he said.

“For me these past 25 years of my career working at our beloved institution have been the best. I will forever be grateful for all the opportunities and for what I have. But the best of all are the people I’ve met and those who positively impacted on my career.”

Prof Abimbola Windapo is a new professor in UCT’s Department of Construction Economics and Management.