Shri Meena also shared his experience with the audience about the elimination of ghost ration cards from PDS and saving of significant sum of revenue due to the usage of Aadhaar. He noted that the benefits of Aadhaar have not only led to monetary savings to the State but also stimulated responsible behavior, transparency and faster delivery of benefits till the last mile in various schemes of the Government.

Aadhaar has proved to be one of the biggest innovations of the country. Quite interestingly, Aadhaar has given identity to a large number of people who did not have any identity whatsoever earlier. The scale and facilities extended by Aadhaar are unheard of in entire world. 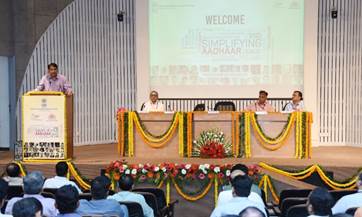 The four sessions of the workshop deliberated on the latest Authentication features added in the Aadhaar ecosystem, Innovative use cases of Aadhaar and best practices implemented in Delhi, Direct Benefit Transfers and Aadhaar Enabled Payment System. The sessions also elaborate m-Aadhaar App, Aadhaar online services and how the UIDAI has made efforts to make Aadhaar enrolment and updation services a seamless experience for the residents.

In his inaugural remarks, Shri Alok Shukla, ITS, DDG(Media), UIDAI(HQ), Delhi highlighted various facets of Aadhaar Ecosystem and informed that recently UIDAI has taken many initiatives for simplifying usage of Aadhaar leading to savings of 2.24 lakh crores in DBT schemes and 134 Cr Aadhaars have been generated so far.

Speaking on the occasion Shri Sanjay Kumar Sohani ITS, Deputy Director General, UIDAI Regional office, Delhi explained how Aadhaar has become the core of India’s digital public infrastructure, bridged the digital divide, enabled e-KYC services, provided banking at the doorstep through mobiles and facilitated cash transfer directly into the bank accounts of the needy and deserving beneficiaries of various welfare schemes of the Government. He further mentioned about the recent initiatives like Face Authentication, Offline Verification & reduction of authentication fees taken by UIDAI. He further emphasized on ALBR so as to further improve penetration in 0 to 5 years.

Various topics were covered in the workshop. Shri Murugan, Jt. Director of School education GNCT Delhi gave presentation in which he elaborated on Aadhaar usage in implementing DBT schemes meant for student beneficiaries. Shri Dhrubojyoti Roy, Senior Associate, National Payment Corporation of India gave a presentation on leveraging the payment gateway for Direct Benefit Transfer schemes of the State Government and backend integration with IT infrastructure of the Banks. Shri Devendra Kumar, Deputy Secretary from DBT Mission shared the best practices on direct benefit transfers. Shri Saroj Adhikari, Dy. Director, UIDAI (Hqrs.) gave a presentation on the process and guidelines for notification of various schemes under Section 7 and Section 4 of Aadhaar Act, 2016 to extend the various subsidies and services to the beneficiaries. Shri Devesh Arya, Senior Manager, India Post Payment Bank, Delhi gave a presentation on the various services provided by the IPPB based on the Aadhaar. Shri Ankit Gupta of Authentication Division, UIDAI HQ gave presentation on online & offline Authentication.