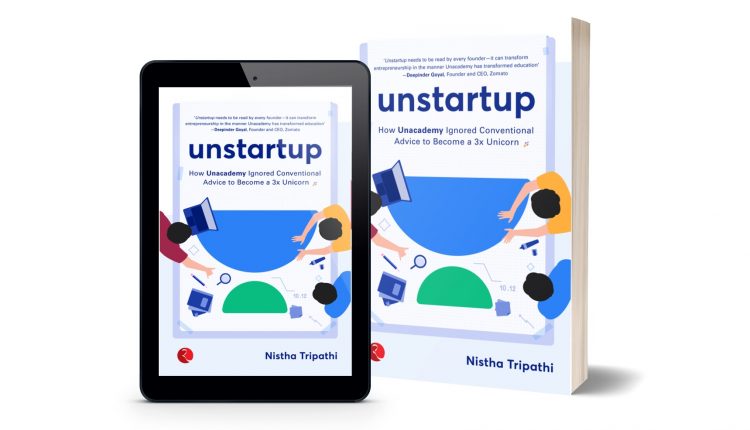 New Delhi: Nistha Tripathi, a bestselling start-up author, announces the release of her new book titled ‘Unstartup’. This book uncovers the factors that led Unacademy to grow from a small YouTube channel to a start-up valued at $3.5 billion in a short span of 6 years. Along the way, they have done multiple experiments, taken bold bets, but most importantly innovated.

Nistha had already documented Unacademy’s journey as a section in her earlier book No Shortcuts, so she has seen the company’s rise up close. She was granted extraordinary access to writing this book, making it a one-of-a-kind insider perspective on the edtech behemoth.

Speaking on the announcement, Nistha Tripathi, Author of Unstartup says “As India crosses 100 unicorns, we need better startup literature so that our next milestone comes sooner. I aim to write books that not only tell the stories of entrepreneurship in modern India but dig deeper into the strategies that characterize high-growth startups. In my interviews with people associated with Unacademy, I discovered insider accounts and anecdotes that reveal the day-to-day thinking, decisions, and discipline of a unique (un)startup.”

AWARD-WINNING MAGICAL REALISM MEMOIR THE WATER PHOENIX HAS A…

She further added, “Unstartup offers a ringside view of how Unacademy ignored conventional advice and created its own playbook for success”.

The book Unstartup is published by Rupa Publication and is set to launch on 5th June’2022. Pre-orders are now open and are available on Amazon India.

Nistha is an active career coach (certified with NeuroLeadership Institute, USA), acclaimed author, and prolific speaker. She has given talks at leading startup events and college start-up fests. Her first novel, Seven Conversations, interpreted Bhagavad Gita in a modern context and gathered rave reviews. With 120,000 plus followers and more than 16 million views on her content across Quora, LinkedIn, and Instagram, Nistha actively writes on entrepreneurship, career advice, and pursuing one’s passion. Her articles have appeared on Entrepreneur, Time, DailyO, DNA, The Tribune, and other leading media outlets.

Apart from running Scholar Strategy, she conducts aspirational talks for students and writing workshops for bloggers.

University of Tübingen: Spectacular ceiling paintings discovered in the Temple of Esna

University of Geneva: First genomic sequencing of Monkeypox in Switzerland

iednewsdesk Jul 5, 2022
The Geneva Centre for Emerging Viral Diseases of the Geneva University Hospitals (HUG) and the University of…

University of Geneva: A convention to decarbonise International Geneva

University of Nottingham: Next generation of engineers to see…