A UNSW Master’s student has designed the world’s first soft robotic hand that can pick up, put down, paint and hammer with greater ease than current models in the workforce.

“Industrial robots are so dangerous the way they are now,” says Charlotte Firth, who is creating the robotic hand as part of her Master of Computational Design degree.

“Being able to create soft robots would change the way humans interact with them and it will take out the element of danger.” 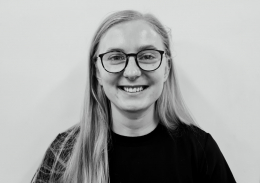 The robotic arms, nicknamed Betty and Arnold, are two of just six in Australia, and UNSW is the first university to have them up and running.

Ms Firth and her supervisors, Dr Kate Dunn and Associate Professor Hank Haeusler who run the robotics program in the Design Futures Lab will begin trialling the hand’s capability at the end of 2020.

“We’ll be testing [the hand as an attachment on the robotic arms] and actually seeing if that soft material has the capability to hammer a nail, pick up a paintbrush and be able to paint and trim,” Ms Firth says.

Unlike industrial robots, these collaborative robots — known as cobots — have stop sensors that enable them to work alongside humans in various workplaces, Dr Dunn says.

From hammering on construction sites to one day more advanced procedures in surgical situations, the two robotic arms need to be sensitive enough to work alongside people without hurting them.

So, Ms Firth is creating the cobot’s hand out of softer silicone material and making the palm more human-like in its range of motion to allow it to do more tasks. 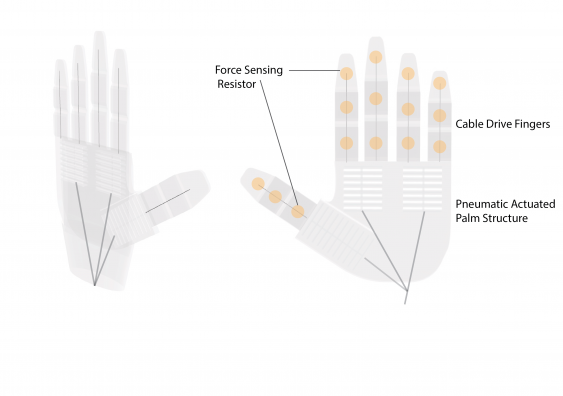 An early image of what the robotic hand might look like upon its completion. Photo: Charlotte Firth

The robotic hands currently on the market are mostly two-pronged grippers and do not mimic the motion of the human palm when picking up, grasping and putting down objects, says Ms Firth.

“People have focused a lot more on the finger design and how we move them towards our hands,” she says. “But no one has actually focused on the hand as a whole and how your palm works within that process.

“When you grab something, you don’t just fold your fingers down to grip a tool, you actually move your whole hand with it.”

The robotic hand will be programmed to manage mundane to meticulous tasks such as painting, trimming and hammering on construction sites.

“[For example], painting around the edges of door frames is a task that is very repetitive, needs a lot of accuracy and takes painters a really long time to do,” Ms Firth says.

The robot hand’s early model fingers are tested using silicone with fish wire and steel. Photos of the actual soft robotic hand will be available in December 2020 when the project is complete. Photo: Charlotte Firth

Ms Firth says her robotic hand will cut time and costs for businesses, as cobots on construction sites usually need more than one ‘end effector’ to do a range of actions and activities.

“Anthropomorphic end effectors cost hundreds of thousands of dollars and they’re quite hard to get your hands on,” Ms Firth says. “Everything else is just really basic, or suction grip that can only pick up flat sheets. So the idea behind this is if you want a robot on site then you want it to be able to carry out multiple tasks.”

Additionally, Ms Firth says having 3D printers readily available that specialise in printing softer materials such as silicone would push the limitations further than what is currently possible in research labs.

“You would think that it is easy to pour silicon in and it would set, and you could pull it apart, but it’s actually quite an intricate process,” she says. 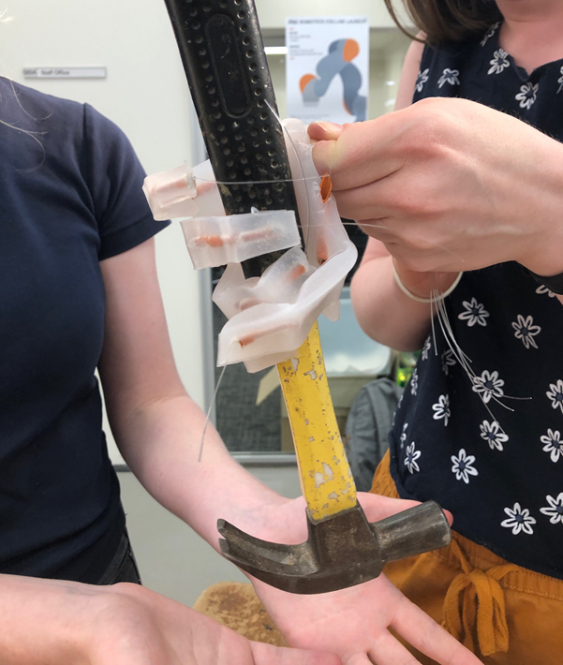 The first attempt at building a completely soft hand with a ‘cable drive’ to see if it could hammer properly was an early fail, says Charlotte Firth. Photo: Nichola Jephcott.

Ms Firth became interested in cobots in construction due to the shortage of skilled workers onsite, and the potential for robotic material because of its underuse in industry, she says.

“[With the] shortages of skilled trade workers and … less people going to TAFE, I began wondering how you could implement [more] robots then to work on site with humans, … not necessarily replace people, but just to fill that void we currently have.”

Most states are experiencing skills shortages in areas such as motor mechanics, panel beating, plumbing and cabinetmaking, according to the federal government’s latest 2018-2019 Labour Market analysis of Skilled Workers.

As a result, employers can now field skilled workers from overseas during the COVID-19 crisis if they can first prove an Australian citizen or permanent resident is unable to fill the role.

But with the $2 billion Job Trainer package announced in July, about 340,700 job seekers and school leavers could end-up retraining or up-skilling in areas where there are some of those shortfalls.

And in the attempt to keep about 180,000 apprentices employed during the pandemic, the government has this year invested $2.7 billion in a wage subsidy scheme set to benefit about 90,000 small and medium businesses.