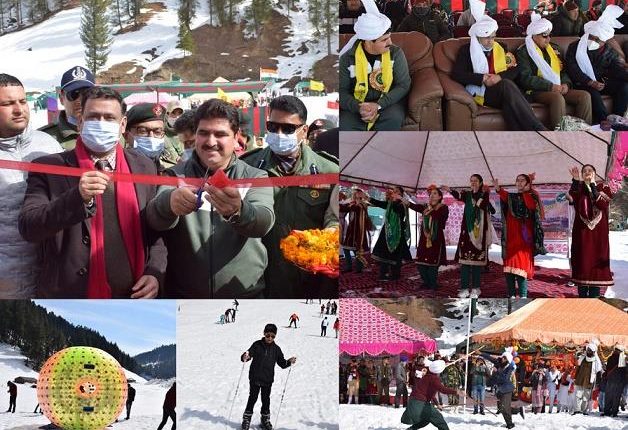 DODA : A 3 day Snow Skiing festival took off at picturesque Jai Valley for the first time in 10 years, here on Friday amid strict adherence to Covid protocol.

The event, organised by District Administration Doda in coordination with BDA, Indian army and Jawahar Institute of mountaineering, forms part of measures being taken by the stakeholders to tap huge tourism potential and attract major tourists footfall to the district.

Speaking on the occasion, the DDC Chairman said that the Snow Skiing event has been hosted at such a grand scale for the first time after a decade to boost the tourism potential of the district, especially in the Bhaderwah area. He expressed his gratitude to the district administration, BDA and Indian army for their efforts.

He also said that such events will not only amuse the locals and tourists who come from all over the district, but will also provide employment opportunities to the unemployed youth of the area in the coming days.

While addressing the gathering, the DC appreciated the organising and management teams for ensuring the grand opening of the event. He assured the public that network facility, toilet and other amenities will be made available for the convenience of the tourist w.

He said that the initiative has been taken under the guidance of the MP and Union Minister Dr Jitendra Singh under Sansad Khel Spardha and assured to organise more activities in the coming days to project the district as a tourist destination of national repute. He said the LG, J&K is committed to boost tourism and build tourism infrastructure across the UT. “The LG administration is also focused on promoting sports activities among youth and to extend all-out support to the local talent to scale new heights of success” he said.