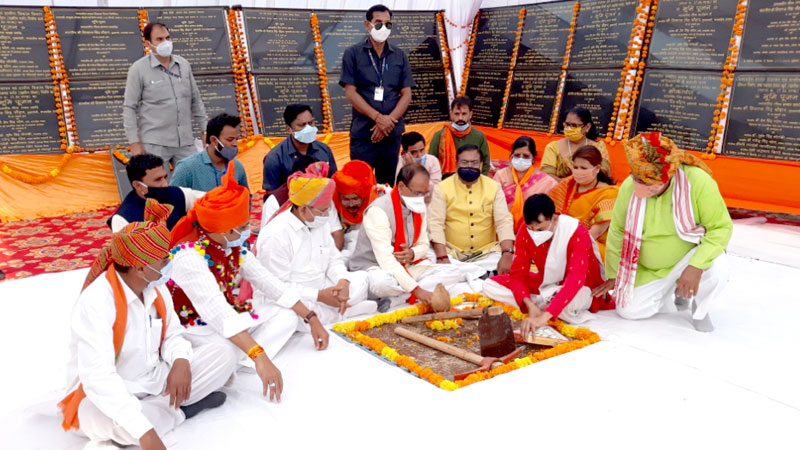 Bhopal : Chief Minister Shri Shivraj Singh Chouhan has said that Bhagwan Birsa Munda, martyr Bhima Nayak, martyr Tantya Mama laid down their lives to protect tribal culture and liberate the country from the British. They struggled relentlessly against the British to stop exploitation, conversion and save our culture. He worked constantly for preservation of the religious rituals, life values ​​and culture of the tribals and their freedom. Fairs will be held every year on the birth anniversaries of tribal martyrs.

Chief Minister Shri Shivraj Singh Chouhan was addressing the Tribal Pride Felicitation ceremony organized at Oonchi village in Barwani district today. Chief Minister Shri Chouhan also made everyone raise both hands to resolve that they will contribute in saving their culture, tradition and life values.

The Chief Minister said that great personalities like Bhagwan Birsa Munda, martyr Bhima Nayak, Raghunath Shah, Shankar Shah, Tantya Bhil gave their contribution to the independence of the country. We will never be able to forget the contribution of these great personalities. Our tribes are the mainstream of the country. Efforts will be made to keep the tribal traditions and culture intact. Some people are trying to destroy our cultural, social harmony in the country by spreading misconception. Attempts are being made of religious conversion by luring and tempting people and instilling fear in them. Strict action will be taken against such anti-social elements. Love-jihad will not be allowed on the land of Madhya Pradesh, a law will be made in the state soon. A provision of 10 years’ punishment will be made for those who lure girls and marry them.

The Chief Minister said that those tribals who have been given land pattas in Madhya Pradesh will also be given the benefits of Mukhya Mantri Samman Nidhi Yojana, Pradhan Mantri Samman Nidhi Yojana. The tribes in the state will not be allowed to be exploited and looted. Those moneylenders who have given illegal loans to tribal families and mortgaged their property in Madhya Pradesh have been pardoned. The Tribal Loan –Waiver Act 2020 has been enacted against illegal moneylenders. Under this, provision has been made to jail those who do not return mortgaged property to the tribals.

Farmers of the state will get reasonable prices for vegetables

During the programme, Chief Minister Shri Chouhan said that farmers in Barwani district are producing good vegetables, but due to middlemen they are not getting their right price. Due to this, farmers and consumers are not getting benefits. Arrangements will be made to ensure that the farmers get proper price for their produce and consumers also get vegetables at reasonable prices.

Chief Minister Shri Chouhan distributed Forest Rights certificates to 1021 beneficiaries of the district under the Forest Rights Act at the programme. He also honoured five talented students of the district. The Chief Minister also distributed credit limits to self-help groups. Similarly, Shri Amit Pandit was given a loan of Rs. 25 lakh and patta on Temla Talab to Mukesh Patel Fishermen Group for opening new industries under the Prime Minister Employment Generation Programme. Certificates were also distributed to women with girl child under Ladli Laxmi Yojana.