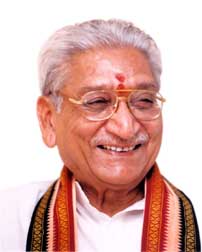 ‘Bharatatma Ashok Singhal Vedic Awards’ to be conferred in the memory of Late Sh. Ashokji Singhal

New Delhi: In the fond memory of late Ashokji Singhal, the former International President of Vishwa Hindu Parishad (VHP), the Singhal Foundation will celebrate the ‘Bharatatma Ashok Singhal Vedic Puruskar’ programme on September 25. The objective behind convening such an award ceremony is to promote Vedic education across India and appreciate the efforts of all those working in this.

Yoga Guru Swami Ramdevji will be the chief guest while Union Home Minister Rajnath Singh ji will preside over the Awards Ceremony. The best student receives a cash reward of Rs 3 lakh, while the winner of best teacher award gets Rs 5 lakh and the best school is awarded Rs 7 lakh.

“Apart from being the leading light of Hindutva and a thought leader, Respected Ashokji Singhal was also a great proponent of Vedas. He always loved to read and impart the knowledge of Vedas as a result of which he initiated the openings of several schools/institutes for the learning of the vedic scriptures.

It is due to his deep interest in the vedic scriptures that has encouraged our Foundation, and to perpetuate his commitment to them.”

Similar to last year, the Foundation has invited applications from a host of vedic schools and institutions throughout the country.

A special committee is set up which shortlists the candidates/names from the entries received till July 10, every year. The committee then visits all the shortlisted institutions to further authenticate the entries. The committee then recommends three-three names for each of the 3 categories. Subsequently, a reputed special jury, comprising of five Vedic experts, chooses the winner under each category.

The organizers feel that these awards which are held annually will help to promote and propagate Vedic education, and which would be a befitting tribute to Respected Ashokji Singhal.

Tamil Nadu-based Rajagopal Ghanpathi, recipient of the best teacher award in 2017 said, “It was a matter of pride for me to receive the esteemed prize of the best Vedic teacher last year. It has given me recognition and now people know and acknowledge my work courtesy this award. It has encouraged me to work more actively in the field of Vedic education.”

Gujarat students are all set for Industry 4.0 revolution

MovieChain ties up with AYGL Group to explore GCC market