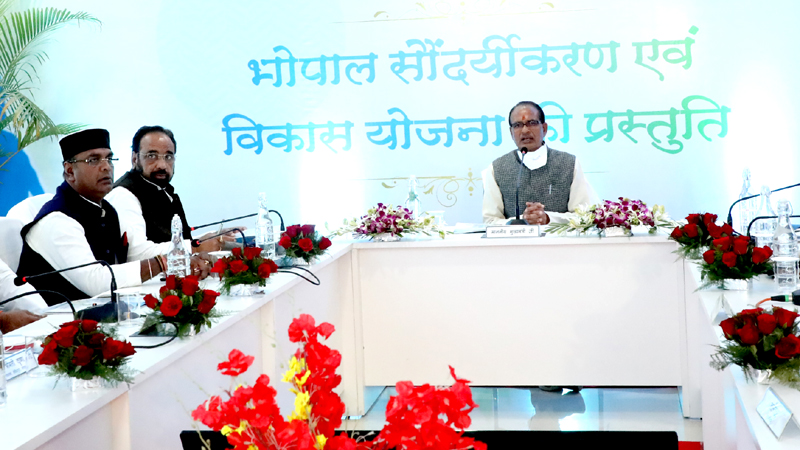 Bhopal should be the most beautiful city in the country and a centre of adventure tourism: CM Shivraj Singh Chouhan

Bhopal : Chief Minister Shri Shivraj Singh Chouhan visited various areas of Bhopal city today besides performing bhoomi pujan and dedicating development works. The Chief Minister was accompanied by Public Works Minister Shri Gopal Bhargav, Medical Education Minister Shri Vishwas Sarang, former Mayor Shri Alok Sharma and MLA Smt. Krishna Gaur. The Chief Minister said that Bhopal is known for its lakes and greenery. Bhopal will be made a destination for adventure tourism. As many as 150 new parks will be developed in Bhopal which will enhance the city’s greenery. New development works will become the identity of Bhopal. Construction of various roads at a total cost of Rs 200 crores is in progress. These roads are being constructed under the Capital Project Administration. Besides, 600 new buses will run in Bhopal, out of which 300 will be CNG buses. Total 14 acre area in T.T. Nagar Dussehra Maidan will be developed at a cost of Rs 26 crores. In the next five years, 52 thousand houses including 2500 government houses will be constructed.

Chief Minister Shri Chouhan first inaugurated the newly constructed road from Platinum Plaza to Jharneshwar Temple. Shri Chouhan said that the road will now be named Atal Path, not Boulevard Street. The new Swadeshi name is suitable and logical for the new street. The Chief Minister said that this is an important step in the development of Bhopal. The newly constructed street is 45 meters in width and 1.6 kilometers in length. This route will have three parts, first for the purpose of smooth movement of vehicles, second for bicycle and third for pedestrians. Drinking water, ATM, bus stop, cycle station and chairs for rest have been installed on the route for the convenience of passersby.

Chief Minister Shri Chouhan inaugurated solar power project on VIP road near Bhopal’s upper lake. This will enable the operation of Karbala pump using solar energy on the VIP road. Bhopal Smart City Development Corporation Limited has installed 1540 solar energy panels on VIP road along the banks of the upper lake. The plant has a capacity of 500 KW. Total 75 thousand units of electricity will be produced every month from the solar plant. The cost of this project is Rs.2 crore 6 lakhs. The street lights on VIP road are being lit using solar energy. The revenue from the solar energy plant on VIP Road is estimated to be about Rs 76 lakh 65, which was spent in the form of electricity bill. The central government is paying special attention to solar energy and other alternative energy. Under this, Bhopal Smart City Development Corporation has started this power plant. Chief Minister Shri Chouhan also performed bhoomi pujan for construction of water wall and fountain of Smart City. Under this, a musical fountain will be built at a cost of about Rs 6 crores, which will attract tourists. Chief Minister Shri Chouhan instructed to complete this project in the next three months.

During the tour, CM Shri Chouhan performed the bhoomi pujan of 823 meter long railway over bridge. Its administrative approval is Rs 17 crore 45 lakh which will benefit about 5 lakh people. The goal is to complete the work in one and a half years. Being the busiest road of the city, there is a lot of traffic pressure here, which will ease out once the ROB is constructed. The closure of the railway gate results in a jam, this problem will also be solved. Time, fuel and energy will be saved. A five and a half meter wide service road will also be built on either side of this ROB to be constructed from Devaki temple near Karond Mandi under Narela area to Nishatpura. In the bhoomi-pujan programme. Chief Minister Shri Chouhan said that four other ROBs including this work have been approved. The Chief Minister congratulated Minister Shri Vishwas Sarang and local residents for the bhoomi-pujan of the ROB.

Chief Minister Shri Chouhan also saw the beautification work of Bhanpura Khanti during his tour. He said that it will be redesigned, whoever comes to Bhopal will not leave the city without visiting it. He appreciated the work of changing the look of the site. The Chief Minister said that this is a great innovation. Under the scheme, a commercial complex is being constructed at a cost of Rs 32 crores. Chief Minister Shri Chouhan said that till yesterday this Khanti was like a blot on Bhopal. Now preparations are on to convert this place into a tourist destination. Looking at it today, no one can imagine that there must have been a Khanti here. Chief Minister Shri Chouhan said that the area adjacent to it should be developed as a tourist centre of the city. Cafeteria etc. should also be constructed. A park is being developed on 16 acre land in Khanti by reusing 21 acres of land after scientific treatment of 7.23 lakh tonnes of waste.

Chief Minister Shri Chouhan lauded the work by inaugurating the waste disposal plant at Govindpura. Modern transfer stations have been constructed at Govindpura, Baba Nagar and Idgah Hills by Bhopal Smart City Development Corporation. Here dry and wet waste will be brought separately through modern vehicles and they will be separated and condensed and sent to Adampura Khanti through closed capsules. Online monitoring of the entire process will be done from the Smart City Control Room.

Action plan for beautification and development of Bhopal

Chief Minister Shri Chouhan took a meeting related to the beautification and development of Bhopal in the Smart City Office after touring the city. He saw the presentation given by Commissioner Bhopal Shri Kavindra Kiyawat. The Chief Minister said that Bhopal will be developed as the most beautiful city. Economic activities will be increased here and inclusive development will be undertaken while taking full care of environment. Bhopal city is famous for its lakes and greenery. It will be further enriched naturally. Van Vihar will be given a facelift and work will also be done on night safari.

Chief Minister Shri Chouhan said that we have started a campaign to prepare a roadmap for the development of Bhopal. Bhopal is the most beautiful city and the cleanest capital of the country. The Chief Minister said that we want to include Bhopal among the most beautiful cities of not only the country but of the world. In addition to the works for which bhoomi pujan was performed or have been dedicated today, new works will also be taken up.

The Chief Minister said that 36 more roads are being constructed to improve public transport. Deendayal Rasoi work will be expanded. This arrangement will be made at three new locations. As many as 15 Rain Baseras will be built in the city. We will promote the use of electric vehicles and 67 charging stations will be built for this. Chief Minister Shri Chouhan informed that about Rs 600 crores will be spent for Ayodhya bypass, Rs 414 crores for Kolar road, Rs 264 crores for Bairagarh and Rs 105 crores for coach factory for roads, flyover etc.

The Chief Minister said that the plan for revival of Pari Baazar, development plan in view of increasing number of coaching institutes in Vidya Nagar, redesigning Shaurya Smarak, development of Bharat Mata Mandir on Manuabhan’s tekri will also be undertaken.