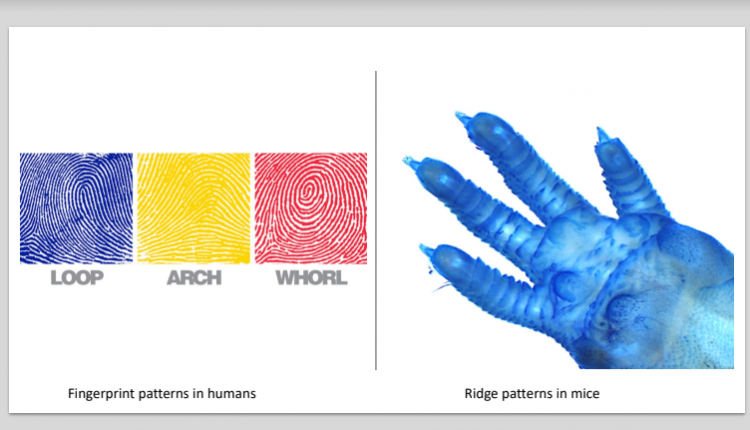 Varanasi : A landmark study, recently published in one of the most prestigious scientific journals of Science CELL, has found that fingerprint patterns in humans are determined by the limb development genes. The study was conducted by a team of international scientists comprising those from Shanghai, Australia, UK, USA, and India. Dr. Chandana, Scientist from Centre for Genetic Disorders, Institute of Science, was the only scientist from India in the team. Fingerprints are known to be unique to an individual but they can be generally categorized into three types – arch, loop, and whorl. To understand the genes responsible for fingerprint patterning, the team studied DNA from more than 23000 individuals from different ethnic groups and identified 43 genetic loci contributing to fingerprint patterning. Interestingly, they found that most of these genetic loci are from the genes involved in the limb development pathways rather than genes related to skin development. One of the topmost genes identified was EVI1, which has been known for its role in embryonic limb development. When the team further tested using mouse models of EVI1, they found that genetically modified mice with decreased expression of EVI1 developed abnormal skin patterns on their digits compared to the wild-type normal mice. Furthermore, the study also revealed the correlation of fingerprint patterns with hand proportions. For example, people with whorl-shaped fingerprints on both their little fingers tend to have longer little fingers than those who don’t. This is one of the most comprehensive studies on genetics of fingerprints patterns and studies like these help us to understand better the existing human phenotypes or how we vary from each other.

Dr Chandana says “There are no fingerprints in mice, but it was interesting to develop a method of scoring the ridges (the analogue of fingerprints). When we compared these ridge patterns between modified EVI1 and normal mouse, we found a similar result as humans.” This is one most comprehensive study on genetics of fingerprint patterns.

Prof. Parimal Das, Coordinator of Centre for Genetic Disorders, said, “Comprehensive study like this involving population genetics, mice model, cell biology, protein network is a powerful approach to unravel the biology of complex traits and is the need of the hour.”

Prof. Anil Kumar Tripathi, Director, Institute of Science said, “Genetic association of fingerprints with limb development is a new dimension of developmental biology which may have important societal implications. Participation of Dr. Chandana in this study reflects her zest for inquiry into the mysteries of nature.”

Link of the article