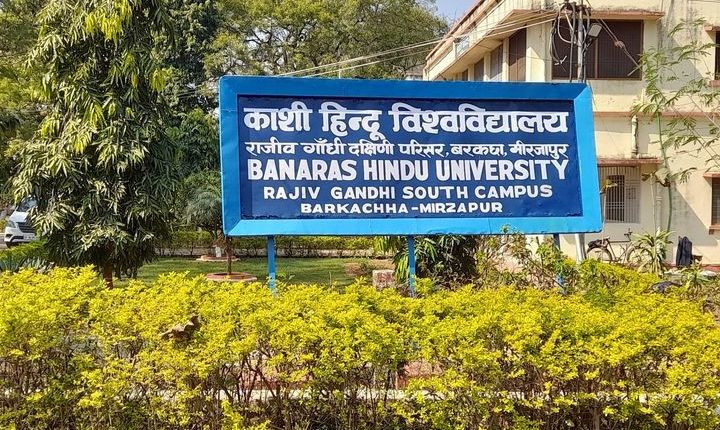 VARANASI  Water is a precious natural resource. While India is well endowed with natural water resources, not all parts/regions of the country enjoy the same level of aquatic prosperity. Mirzapur district of Uttar Pradesh is one such area and among seven most drought prone parts of the state. Agro-ecologically the district has two major situations – Indo-Gangetic plain (30-40% area) and Vindhyan region. The Vindhyan region has meagre water resources and the land is mostly degraded. In such a scenario, operating a full fledged university campus which has thousands of students, teachers and employees residing in, agricultural farms, veterinary educational and research set up, has its own unique set of challenges. Rajiv Gandhi South Campus of Banaras Hindu University, 70 km from Varanasi city and about 12 km on the outskirts of Mirzapur, established on the plateaus of Eastern Vindhyan region, was faced with a similar daunting task of meeting the water requirements of an upcoming campus. Located in Barkachha in Mirzapur, which is considered to be an economically backward district of Uttar Pradesh, finding ways to develop water management system and most importantly for arranging water was the topmost priority. Members of BHU fraternity still recall early days when they would travel to Barkachha campus from BHU main campus carrying enough water for the entire duration of their stay.

In Mirzapur, which has only 40% cultivable land with no assured irrigation facility, farmers have to remain contented with specific dryland / rain fed crops. The soil is eroded with poor nutrients status. Major portion of the area being rocky and undulating, the underground water resources are uncertain, unpredictable and untapped to exploit potential agricultural production. Erratic rainfall distribution, extensive erosion, soil degradation, nutrient depletion and submergence of cultivable area are the challenges those involved in agricultural activities face. The soil here is of lower depth, fertility and organic matter status, which limit its nutrient and water holding capacity.

But despite all odds, the South Campus of BHU is leading by example and the nearly 2700 acre campus has become self-reliant for its water needs, probably the first and the only such campus in the country. At a time, when world community is putting greater focus, energy and resources to make people aware of the worth of each drop of water so that no one on the planet remains thirsty, BHU’s south campus is presenting an example to be followed by one and all, by becoming completely AtmaNirbhar when it comes to fulfilling its water requirements. The campus has developed its own water management and supply system. It also constructed rain water harvesting structures to meet water needs of agriculture and cattle.

THIS IS WHAT HAS BEEN DONE

There are a total of 9 check dams, 2 runnoff water collection ponds and 3 wells in the campus to store rainwater. Each of the check dams can hold water upto 2 lakh litres. The water from the check dams is used for irrigating the agricultural fields in the campus. At present around 40 hectare of land is being cultivated using the water collected in the check dams. Different crops are grown in agriculture farms. During Kharif Paddy, Til, Bajara, Maize, Pigeon pea, Moong and Urad crops are grown, while during rabi season, Wheat, Barley, Lentil, Gram, Mustard are the main crops. The check dams are also used for fish farming. Besides, there is one large farm pond having a water storage area 100 m x 100 m with an average depth of 3-4 m and two runoff water collection bandhi. These bandhi and pond store water for short period from July to December for irrigation.

To meet the daily needs of drinking water for South Campus, surface water is pumped from Lower Khajuri dam in Barkachha. The dam is around 2.5 km from the campus for which the University has laid a pipeline. At the dam, the university has constructed a pumping station. The water is pumped into the filtration unit built in the Campus. As part of this exercise about 12 – 13 lakh litre water is being pumped which is then filtered and treated for drinking. The water is stored in two collection tanks of 5 lakh litre capacity each. From the filtration unit a raw water pipeline has been laid to the Faculty of Veterinary and Animal Sciences to maintain cattle and other animal shelters. Besides, this raw water is supplied to Bael, custard apple, Karonda and Guava orchards. About 04 hectares of area is being cultivated with lemon grass which is also irrigated with the raw water from the pumping house. The waste water after filtration is transferred to the check dam of recently constructed bundhi of Krishi Vigyan Kendra (KVK), Barkachha. The water is used for maintaining agricultural fields of KVK- BHU.

The wells are about 1-20 m deep with a diameter of 10 meter and contain water from July to May month. The water from different wells is used for developing the landscape and plantations in the campus area.

Check Dam 3 – Constructed during 2014, contains water from July to May.

Check Dam 4- Contains water from July to May.

Check Dam 5 and 6 – Contains water from July to May.

UniFarm gears up to end Q3 with a bang; to launch 3 new IDOs, listing on top centralised exchanges & much more