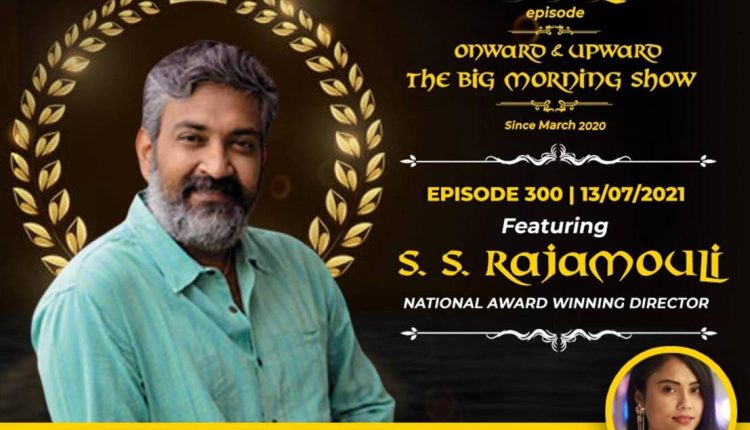 ~ During the hour-long session, S.S. Rajamouli shared candidly his thoughts on the new-normal, his learnings amidst the pandemic, the future of the OTT space and his upcoming projects ~

New Delhi:  BIG FM has added another feather to its glorious cap as one of its distinctive marquee properties, ‘Onward & Upward – The BIG Morning Show’ has hit a triple century! The impactful learning series was launched last year at the onset of lockdown to enable the BIG FM workforce to think beyond the ordinary and adapt to the changing times. The series has seen many personalities be a part of its impressive journey and grace the show with their presence. Marking the milestone of its 300th episode in a grand manner, the radio network hosted the visionary National Award winning director S.S. Rajamouli as its special guest on the occasion.

More than 17,000 students from across the country…

Hosted by BIG RJ Simran Kaur Sethi, the hour-long session was attended by over 400 employees and witnessed an engaging, thoughtful and inspiring conversation with Mr. Rajamouli. He shared his thoughts on many topics including giving India one of its biggest magnum opus franchises – Baahubali, his vision as a storyteller, how the pandemic has affected his journey, OTT vs theatrical releases, his upcoming ambitious project RRR and much more. Urging everyone to always keep the flame of hope burning, he spoke about how he kept himself occupied with his work during the lockdown and restarted with renewed vigour when the restrictions were lifted.

Talking about how the pandemic and lockdown affected his journey, Mr. Rajamouli said, “If we keep aside the health aspect, I feel there are so many positive things that we can learn from this halt. With this, we are getting time to spend with our family, to relook at what we are doing and where we want to be. I see it as an opportunity to look at life in a new perspective”

Sharing his love for mythological dramas and storytelling, he said, “Mythology is my favourite genre, it is where all my creativity stems from. I am not into story creation but into storytelling. I don’t have the ability to create a story but I know how to present it and bring alive the dramatic moments.” He further commended RJs for their ability of storytelling. “RJs are storytellers too. I really admire their spontaneity and the instant creativity that they have. I don’t have that kind of spontaneity.”

Sharing his thoughts on the present OTT and theatre scenario, the filmmaker said, “I don’t see OTT as a competition to theatre or TV. I look at the industry having three different platforms – Theatre, OTT and TV. I’m in a comfortable space because I base my films more on primary emotions, so in a way my work addresses every variety of audiences.” On what can be expected from his much-awaited film RRR, he said, “You can expect your money’s worth of entertainment. I am confident of the movie because of the story, performances, especially the emotional sequences in the film. I use action in my movies to enhance the drama, which is my strength, so I’m hoping this time too the audiences will have a good time.”

Commenting on touching the 300-episode mark, Abraham Thomas, Chief Executive Officer, Reliance Broadcast Network Limited, said, “We started the series last year with the hope of engaging and inspiring our workforce and redefining our learning curve as an organization with the changing times. It has been 300 episodes of remarkable conversations and some thought-provoking insights. The journey has been a fulfilling one and we hope to further continue it with a renewed passion and vigour. We are glad to have ace filmmaker S.S. Rajamouli to celebrate this feat with us. We are grateful that he graced our landmark episode and shared his experience, insights and views with our team.”

Archanaa Singh, Sr. Vice President, Human Resources, BIG FM further added, “We at BIG FM are extremely thrilled to reach the milestone of 300 episodes. We had a lot of hope when we started ‘Onward & Upward – The Big Morning Show’ last year. Now to see it growing from strength to strength, we are extremely proud and grateful to all our friends, colleagues and leaders from different industries who have been a part of our show. We are also honoured to host Mr. Rajamouli to commemorate this special occasion with us. It was truly inspiring to learn about his journey and his passion for filmmaking. As we progress forward, his words and thoughts will surely further motivate us.”

Since its inception, ‘Onward & Upward – The BIG Morning Show’ focussed on shaping employees’ understanding of emerging trends and adapting them to the evolving business mindset. Started in March 2020, it is currently in its third season and attended every morning by over 350 Biggies. The show has featured eminent personalities and industry stalwarts from varied sectors like Media & Entertainment, FMCG, Automobile and Advertising amongst others such as N.R. Narayana Murthy & Sudha Murty, Shri. Subhash Chandra, Vidya Balan, Anupam Kher, Remo D’souza, Gajraj Rao, Dr. Rupinder Singh Sodhi, Anurag Basu, Sreeraman Thiagajaran, Vivek Sunder, Ajit Mohan, Ranveer Allahbadia and many others.

With an impetus towards reinforcing change and upskilling their employees, the series has played an instrumental role in bringing about a shift by moving beyond traditional static learning to taking action oriented perspectives. As a network, BIG FM continues its endeavour to curate more such offerings that provide immense value to its people, that makes it one of the leading radio networks in the country.

More than 17,000 students from across the country register for the maiden HCCB…