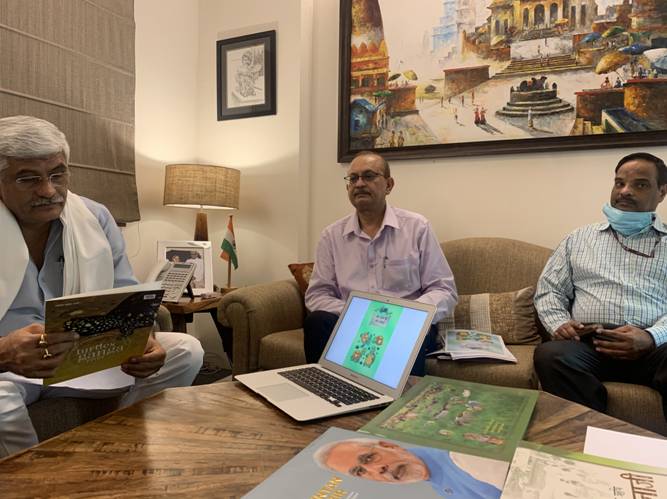 In his special message to the team on World Turtle Day, Union Minister of Jal Shakti, Shri Gajendra Singh Shekhawat said, “Biodiversity is an essential part of Indian Culture and in fact, understanding the importance of Turtles, they have been worshipped in our culture from time immemorial’. He added, “Turtles have been cleaning our water resources and they don’t charge us for doing that job. In order to conserve them and other wildlife, NMCG has taken up several initiatives including establishing conservation centers and creating public awareness about the subject.”

Information about the Ganga Quest quiz, the last date of which has been extended to 30th May 2020, was also shared with the participants in order to maximize the participation of people from different parts of the world. Shri Mishra said, ‘The Ganga Quest quiz is not only a very interesting competition but also a means to create awareness and associate people with the Ganga. I appeal to all those above the age of 10 years to take part in the Ganga Quest.’

On the occasion, winners of the World Turtle Day painting, slogan writing and essay competitions which were conducted using the online platform, were announced. Children from different parts of India and abroad participated in this online competition.

To mark the day, a Children’s story book on turtles, “Bin Vetanke Kare Safai” was released by Shri Shekhawat. This book covers facts about turtles in an interesting story-telling manner. Shri Shekhawat appreciated the innovatively written book which highlights the importance of turtles in maintaining the river ecosystem and appealed to all to contribute to conservation of turtles in our river systems.

The Webinar also saw a poster story on Interesting Facts on Turtles for Children being played. This poster story presents some interesting facts about the turtles and different threats to them.

A documentary on “Turtles of Ganga River Basin” was also showcased for the participants This documentary is made to make people aware about various type of turtles found in the Ganga River.

In his address, Shri Mishra appreciated the efforts of WII and Ganga Praharis for their active participation in making people aware about conservation of Biodiversity. He also appealed to all to come forward and join hands for the conservation of turtles and the biodiversity of the river Ganga. Dr Mohan talked about the significance of celebrating Turtle Day and the role of Ganga Praharis in their conservation.

Given that Biodiversity Conservation of the Ganga river basin is one of the pillars of the Namami Gange programme, the ‘International Day of Biological Diversity’ held yesterday, was celebrated with great enthusiasm by NMCG and WII through a Webinar themed ‘Our Solutions are in Nature’. In order to increase public consciousness about its conservation, Shri Mishra, Dr. Mohan, NMCG team as well as experts from various organisations and Ganga Praharis participated in the event.

Speaking during the celebrations, DG, NMCG said, “We have to make collective efforts to support the rejuvenation of river Ganga. This is possible by making efforts to create better understanding and awareness about the connection between biodiversity and our survival. The conservation efforts have to become a Jan Aandolan”. He added that the NMCG has received substantial success in cleaning the river. “However, in order to ensure the sustainability of water quality, all of us need to make a conscious effort,” he said.

During the event, Director, WII, Dr. Mohan appealed to the Ganga Praharis, other organisations working for the conservation of biodiversity and Media organisations to undertake public awareness initiative to further save the biodiversity of the rivers. “It is easy to say that the ‘solutions lie in nature’, but we have to reduce the negative impact of our activities on nature”.

Ganga Praharis from different parts of the country connected to this programme shared their experience of training in organic farming by WII Dehra Dun and its positive financial and environmental consequences.

COVID-19 Lockdown: JMI boarders from Uttar Pradesh left for their homes in 4 special buses arranged by the university