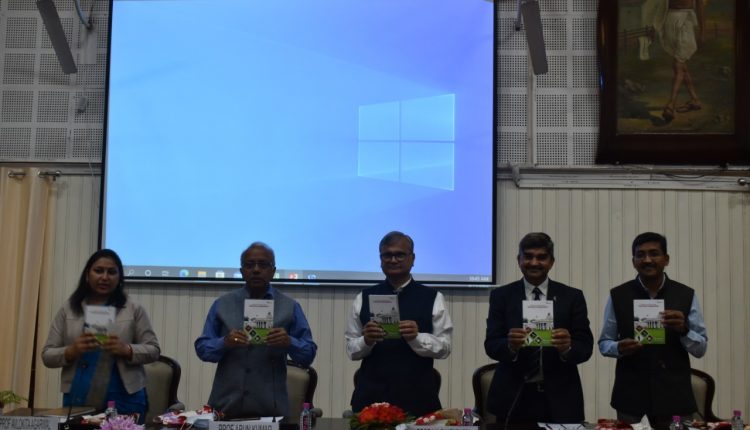 Biodiversity report of IIT Roorkee by Wildlife Institute of India

Roorkee: Wildlife Institute of India (WII), Dehradun, today released a biodiversity report of the flora and fauna of the Indian Institute of Technology Roorkee (IIT Roorkee) campus, in Senate Hall. The study was sponsored by IIT Roorkee and is the first such documentation of the biodiversity of the campus. WII was entrusted with the task of carrying out the 175 years old campus biodiversity inventory where an important discovery for the IIT Roorkee campus is the finding of Typhoniuminopinatum, a herbaceous plant belonging to the family Araceae (Arum). This is the first record for the state of Uttarakhand.

The five-month long floristic survey revealed a diverse assemblage of plants belonging to trees, shrubs, herbs as well as woody and herbaceous climbers. A total of 304 species belonging to 237 genera and 87 different plant families were recorded within the campus. Of these majority are represented by flowering plants or the angiosperms -291 species, while gymnosperms i.e. cone-bearing plants were represented by 9 species. Pteridophytes which include ferns and their kin were represented by mere 4 species. Amongst the floral types, trees were the most dominant with 140 species, followed by herbs – 91 species, shrubs – 45 species, and 28 species of climbing plants. Further, the floristic diversity on the campus is dominated by exotics and most of which are ornamental species.

The report follows a sequence from lower taxa (plants) to the higher taxa (vertebrates). Brief accounts of select species of each taxa group that were recorded on campus along with a checklist of the same are provided. Additionally, other than for plants, plates containing photographs of the different species recorded on campus are also provided. This document therefore can also be used by amateur naturalists and everyone else as a field guide.

Prof. Ajit Kumar Chaturvedi, Director IIT Roorkee, highlighted, “Human influence is accelerating climate change, thus raising serious environmental concerns globally. Thus, it was time to look back to nature to adopt more sustainable ways of living, keeping in mind the future of our planet. It all starts with one’s immediate surroundings and fortunately for us our IIT Roorkee campus is blessed with large green areas that rightly qualifies our campus as an “Urban Greenspace”. And to further our continuous efforts to protect the environment, a collaborative study with the Wildlife Institute of India (WII), Dehradun was initiated and the result is an inventory of the floral and faunal wealth of the campus. Through this document, I am sure many of our faculty, students and staff, and others within the campus, and elsewhere, will be further inspired by Nature.”

Dr. Dhananjai Mohan, IFS, Director, Wildlife Institute of India, remarks, “Spread over 365 acres and located amidst the rapidly growing Roorkee city, the IIT Roorkee campus is found to support a diverse variety of flora and fauna. I am thankful to Director IIT Roorkee for giving us an opportunity to document the various flora and fauna of the IIT campus. The publication has been made in an attractive and colorful style befitting the varied diversity of lifeforms that occur on the campus. I hope this publication would be liked by one and all and will help in inculcating interest in the conservation of nature by the campus inmates.”

Bajaj Finserv successfully concludes its B-school Campus Competition ‘ATOM’ Season 4, with FMS Delhi as the winner and IIM Kozhikode in the second position