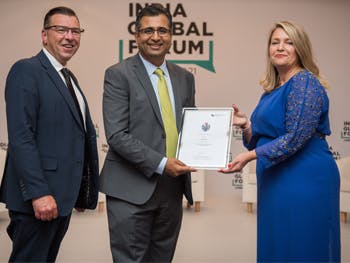 A leading businessman who founded a major India-focussed media company and policy network has been given a top university role.

Manoj Ladwa, founder of the London-based India Inc Group has been named as a Visiting Professor at Birmingham City University in recognition of his expertise spanning business, charity and politics in both the UK and India.

Professor Ladwa, who also served as a member of Narendra Modi’s Prime Ministerial campaign team, is renowned for his work in joining up key collaborations between the two nations.

The India Inc. Group has become a well-known and high profile media resource and owns both the India Investment Journal and India Global Magazine, as well as producing the policy newsletter iIndia.

Professor Ladwa, who has grounded roots in Birmingham, having been born and raised in the city, was formally named the recipient of the role at a special ceremony in London, attended by leaders from the University and from key sectors in both the UK and India.

The position will see Professor Ladwa lead masterclasses for the University’s students and use his expertise in media and journalism to develop new ideas, practices and collaborations with the University’s academics.

Speaking about being named in the role Manoj Ladwa said: “I am honoured to have been given the opportunity to contribute to the excellent work being done by BIME and Birmingham City University in media and communications and in its efforts to build strong ties with India and Indian enterprise.

“This role brings me back to my childhood roots in Birmingham, a vibrant city which has so much to offer through its industry, multiculturalism, and increasing focus on cutting edge green growth technology & innovation.

“I very much look forward to working closely with the University’s world class faculty, students and wider networks in the coming years.”

Professor Alison Honour, Pro Vice-Chancellor and Executive Dean for Birmingham City University’s Faculty of Arts, Design and Media said: “Manoj Ladwa’s experience and expertise has seen him found and develop the India Inc. Group, which has become a major resource in both journalism and policy.

“While the University already enjoys very fruitful links in India, including via our STEAMhouse project, this appointment will help us take these partnerships even further.