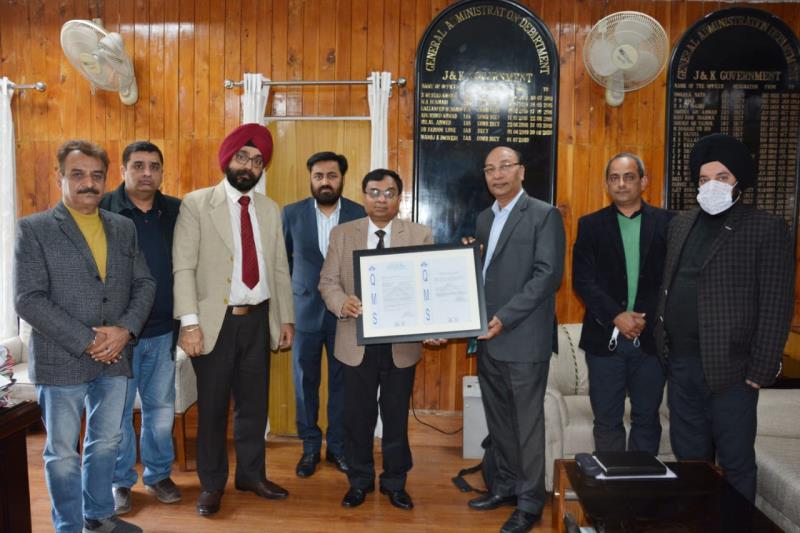 Jammu: Testing Centre of SICOP at Digiana Jammu has been granted BIS certification after thorough inspection by the Bureau of Indian Standards.
The BIS certification to SICOP was formally handed over in presence of Commissioner to Government, Industries and Commerce Department M.K. Dwivedi, here at a briefing given by Sanjay Kumar, Dy. Director General (North) BIS and Taj Paul Singh, Scientist BIS.
It was informed that to meet the latest requirements of the testing, the Testing Centre of SICOP at Digiana was upgraded and the testing equipments/machineries as per the Bureau of Indian Standards (BIS) were installed.
The BIS carried out three audit inspections at the Testing Centre, and accordingly granted BIS certification.
The Commissioner/Secretary, I&C Department was further informed that the Corporation is in the process of getting Accreditation from NABL as well. M K Dwivedi was further informed that the Testing Centre, Digiana is the only BIS approved testing laboratory in Jammu and Kashmir.
The laboratory can now undertake various chemicals and mechanical tests which hitherto were not possible in J&K.
The SICOP Testing Centre Digiana can now play a pivotal role in carrying out various tests for the products of MSMEs and also can cater the testing requirements of other departments and Defence.
In the whole process of upgradation, J&K ITCO has provided consultancy to SICOP in getting BIS Certification by providing various requisite documentation, imparting mandatory training etc.
Acknowledging the efforts of BIS, SICOP and ITCO, the Commissioner/ Secretary to Government, I&C Department, appreciated their joint efforts. He instructed SICOP to give wide publicity in the local press about the facilities available in Testing Centre, Digiana so that all the departments/organizations can avail the same. He also emphasized upon MD SICOP to provide complaint free services to the industry, departments and others who may approach them for getting their tests conducted.
The BIS officials later in the day held an introductory session at the Conference Hall of Udyog Bhawan, Jammu where all officials of Industries and Commerce Department and Industrial Associations were present. The BIS officials gave details about the facilities available with the BIS and the benefits that could percolate to industry in getting their products BIS certified. The officials of BIS also gave a brief about the procedures to be adopted in getting the BIS certification.
The briefing was attended by MD SIDCO, Director Handlooms & Handicrafts Jammu, MD SICOP and other senior officers of various departments besides the representatives if Industrial Associations. From ITCO, the briefing was attended by Sajneev Dogra CEO Mr. Anil Malhotra Vice President.