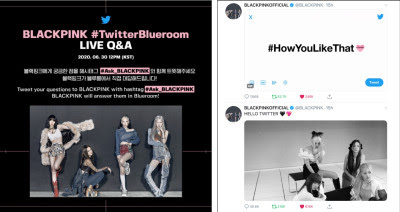 Leading Global K-Pop band #BLACKPINK (@BLACKPINK), who just released their comeback single #HowYouLikeThat on June 26 6PM KST, opened their official Twitter account and posted their first Tweet. This launch Tweet was Retweeted over 250K times and got over 600K Likes. Tweet volume related to ‘BLACKPINK’ reached 5M for 12 hours, and the hashtag of their new song title #HowYouLikeThat trended worldwide No 1 and trended over 50 countries.

On 30 June, Twitter will host a ‘BLACKPINK LIVE comeback party’ as a #TwitterBlueroom Q&A session, to talk about  their comeback and current life. Fans will be able to watch the live #TwitterBlueroom on BLACKPINK’s official Twitter account (@BLACKPINK) and interact with them directly using the hashtags #Ask_BLACKPINK #TwitterBlueroom, or within the live chat room.

Twitter is also celebrating the launch of BLACKPINK’s official account and their comeback by setting up special custom emojis to help fans around the world cheer them on. BLACKPINK’s four members drew their own emojis, which can be activated by hashtagging their names. BLACKPINK’s special emojis will appear on all Tweets using the official hashtags from 26 June to 31 August KST.

BLACKPINK is one of the most beloved K-Pop groups and their official fanclub Twitter account ‘BLACKPINK GLOBAL BLINK (@ygofficialblink)’ was ranked no.1 fastest growing Kpop account, and ranked 5th in the ‘K-POP Artists’ most mentioned by Twitter users worldwide in 2019. It is expected that active communication with global fans will continue through the opening of this official account.