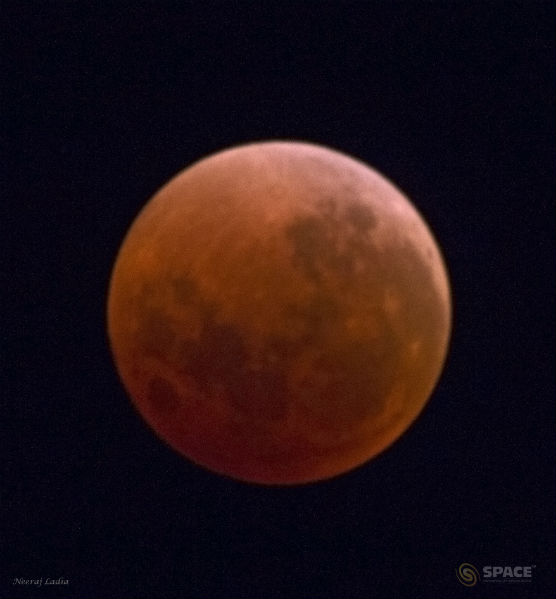 New Delhi: SPACE India conducted public observation of this rare and viewing worthy phenomenon, a Total Lunar Eclipse, on 31st January 2018 from 6:00 pm to 9:30 pm at India Gate, New Delhi. In addition to this, SPACE India conducted 30 different observations at 8 various locations across India!
The Moon was plunged into darkness for 1 hour and 16 minutes (in Full Eclipse phase), in a deep total eclipse. The eclipse was visible from all over India, but at moonrise the moon was already in partial eclipse while rising.
A total lunar eclipse appears dark red due to scattering of light, and is called the ‘Blood Moon’. The red wavelengths get refracted towards the moon by the earth’s atmosphere hence the moon appears red or copper in hue. Additionally, during this eclipse the Moon was a supermoon, just a day past perigee which is the closest point to Earth in it’s orbit, making it appear very large and bright. And lastly ‘blue moon’, is what the second full moon in a month is called. As it is unusual for a full moon to occur twice in a month, hence the phrase, but there is no blue color!
As far as India is concerned, in 1982 on December 30, there was a Blue Moon- Lunar Eclipse – 35 years back. 150 years refers to the last time a Blue Moon – Lunar eclipse combination happened that was visible from the US. Additionally, from India we will witness another Total Lunar Eclipse on 27th July this year.
At India Gate, close to 1000 people thronged at the conduction by SPACE India to enjoy the amazing sight. 2 Dobsonian telescopes enabled the educators to show the moon in detail to the public. The educators also described the phases of the moon and explained what was happening. All present shared food at the time of the maximum eclipse at 7pm, to break the myth that one should not eat during an eclipse. Heavy clouds made it not possible to watch the start of the eclipse at India Gate. The eclipse became visible only at mid eclipse, after which the audience got a great view.
SPACE India also conducted at DAV School, Sector 48-49 Gurugram where more than 500 people joined.

Great Lakes hosts Inter B – School Fest at its campus