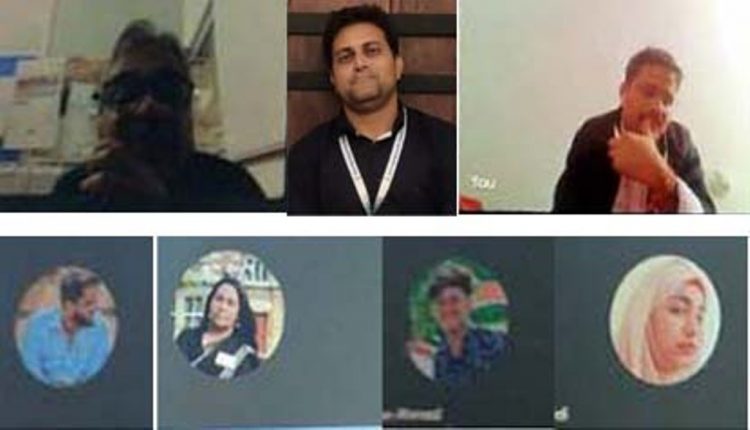 Aligarh : Bollywood script writer, director, founder director of Filmigram and Aligarh Muslim University (AMU) alumnus, Arshad Mumtaz explained the Department of English students, the requisites for detailing character dialogues, scene settings, and actions that take place throughout a film, TV show and other visual stories in an interactive session on ‘How to Write’ organised by Prof Raashid Nehal.

“When writing a script, the writer should properly tell the film’s entire story from start to finish because it is a blueprint of the plot before the film comes to life on screen”, he said.

Arshad added: “Writing a script helps express your creativity and makes a story come to life. It often takes time and dedication to craft well-rounded characters and a compelling plot to create a captivating script. The writer must detail well enough to help the audience vividly imagine it and develop characters in a way that showcases their strengths, flaws and goals”.

He advised students to organise stories with a synopsis that outlines all stages of the movie or a TV show.

“A script is the bedrock of a film. It sets the tone and if the script is not cohesive, it shows through at the tills. There are very few films that can rise above their script—which is why a script or a screenplay should be treated as a very precise craft”, said Arshad.

He pointed out: “You do not need investment or technology to teach someone to write. All it takes is a piece of paper, a pen, and a place to sit, and you have a script. No other skill in cinema can be taught in such a cost-effective way”.

BHU DOCTORS CONDUCT FIRST OF ITS KIND STUDY ON SURGICAL…

Speaking on the relation of writing with visuals, Arshad remarked: “Writing is a transcription of visuals. You have to look at the visuals around you, get provoked and write”.

“But one needs to get out of comfort zones to produce a cohesive script”, he said.

Reminiscing about student life at AMU and how the faculty members inspired him, Arshad recalled: “When I was a graduate student, I heard Prof Raashid Nehal urging students not to desist from learning English speaking and writing skills. I was inspired to immediately start working on writing skills and later went on to become a creative head in the UAE before shifting to Mumbai as script writer, producer and Director”.

He also encouraged students to seek nuggets of wisdom from established writers.

A special poetry reading session also took place in which Arshad found himself moved by AMU student, Alisha Abidi’s poem ‘Agarbatti’. He remarked that the poem could be used in one of his upcoming films.

Prof Asim Siddiqui (Chairman, Department of English) said that these kinds of sessions are essential for the personality development of students.

The online interactive session was attended by MA (ELT) and Communicative English students.

‘The Quran Speaks to You’ by Prof A R Kidwai releases