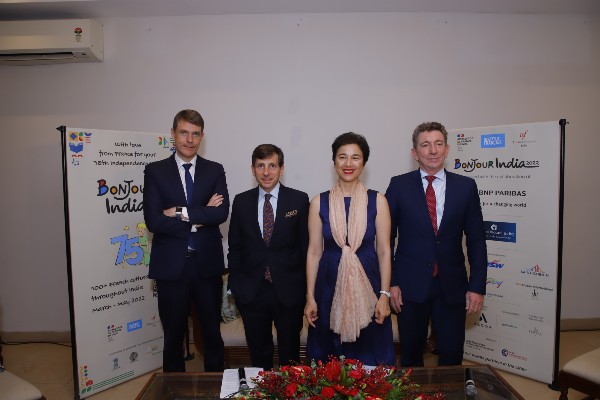 Bonjour India’s art, dance, music, and cinema events have captivated countless Indians, and will continue doing so for months

New Delhi: Bonjour India, an artistic, cultural, educational, and literary festival, celebrates the partnership between India and France. An initiative by the Embassy of France and its cultural department Institut Français en Inde, along with the network of Alliances Françaises and the Consulates General of France, the festival has delighted thousands in India since March 2022 through 120 curated and collaborative events across 19 cities this summer. The events included Café Cinema, Wall Art Festival, ELEKTRIK by Blanca Li, Rick-Show, Let’s Dance!, A Trip to France, 1970, City for All?, Analemma, [In]Chorus Plucking Ragams and Strings Together,  Electro Jazz- Electrik Pô and Nunataq, A Twist of Fate, S. Thala, The Goncourt Choice of India, Battle BD – Comics Wars, French Literary Fest, Science Beyond Borders and Convergence.

Speaking at the press conference Ms. Eva Nguyen Binh, President of Institut Français, France, said “I was delighted to attend Bonjour India festival which is supported by Institut Français. ELEKTRIK’s performance in Mumbai shows how successful a contemporary ballet company can be in a metro city like Mumbai. India plays a major role in the development of electronic music. Bonjour India’s philosophy is to foster encounters between artists from our two countries so they can produce innovative creations together. I hope to see more artistic partnerships build on the festival’s momentum.”

Together these events have entertained, informed, and educated thousands of adults and children across the country. Events that will continue or begin over the next few weeks and months are: Science Beyond Borders, Convergence, A Trip to France, ELEKTRIK by Blanca Li, Café Cinema, Night of Ideas, Let’s Dance! Film Festival, and French Cartographic Journey to India.

ELEKTRIK by Blanca Li is a unique choreography, coupled with electro music infused with baroque influences that guarantees to transport audiences to a graphic world where dancers create optical illusions with their kaleidoscopic movements! The event was held in Mumbai on 8th May. It is scheduled in Hyderabad on 11th May, and in New Delhi on 14th and 15th May.

Speaking about ELEKTRIK’s tour of India Mrs. Jindal, Chairperson, JSW Foundation, JSW group said “The performing arts, especially dance, transcend language and can connect us across borders wordlessly. I believe that this cutting edge performance will present global electro dance culture in our Indian cities in an exciting way and connect with audiences in an engaging manner. I wish the innovative dance troupe and its dynamic director all the best for their tour.”

The Science Beyond Borders exhibition showcases the shared scientific history of Indo-French scientific collaboration. Instead of delving into the technical nuances of scientific discoveries and achievements, the exhibition allows visitors to hear stories about the interactions of the people behind such discoveries, learn the historical significance of such scientific collaboration, and see how these partnerships continue shaping our world today. Speaking about the exhibition, Mr Aymar de Liedekerke Beaufort, Head of Territory, India, and Head of (CIB), India, BNP Paribas stated, “As the bank for a changing world, BNP Paribas is globally involved in many projects that foster innovation. Our association with Science Beyond Borders also fosters scientific and technological exchanges between India and France.”  Science Beyond Borders is scheduled in Mumbai from 10th– 30th September, Bengaluru 6th – 21st May, Hyderabad 3rd – 26th June, and Kolkata 5th – 31st July.

After months of lockdowns, the Convergence exhibition has proved the perfect way to mingle in an upbeat setting. So far guests have enjoyed photographs that were being displayed in India for the first time. Visitors have seen photographs of India taken from the mid-19th century until the 1980s by Indian and French photographers. The event is scheduled in Mumbai from 1st – 30th November, Delhi 28th April – 30th June, Chennai 11th – 19th May, and Kolkata 2nd – 23rd June.

A Trip to France, 1970 exhibition focuses on Prof. Parmanand Dalwadi’s journey to France in the ’70s tracing 50 photos captured with his Nikon F and the influence of Cartier-Bresson on his art. He captured incongruous and unusual situations combining humour, tenderness and observations of French society which are described with short stories for each photo. It is scheduled in Lucknow from 5th – 14th May, Bhopal 21st – 29th May, Hyderabad 22nd May – 8th June, Bengaluru 6th – 30th June, Kolkata 18th June – 2nd July, and Jaipur 1st – 10th August.

Café-Cinema is a ciné-food experience for cinema and food lovers. It offers a few hours of community, conviviality, memories and tastes that last forever. “Pernod Ricard India is pleased to sponsor Bonjour India 2022 – a three-month-long festival that celebrates the long-standing relationship and exchange between India and France in art, science, and culture. It is a great opportunity for us to create moments of conviviality to help unlock the magic of human connections.”, said Ranjeet Oak, Chief Commercial Officer, Pernod Ricard India.

The Night of Ideas in Chandigarh on 14th May, @7pm offers an opportunity to explore the latest discoveries in knowledge and arts and to take part in the discussion about the main issues of our times. The Let’s Dance Film Festival screens short films around dance offering astonishing points of view; personal, dramatic, funny, sometimes nervous or even explosive. It is scheduled in Bengaluru on 13th May and Bhopal on 14th May.

The French Cartographic Journey to India will be held from 28th May to 11th June in Hyderabad, at the Alliance française d’Hyderabad. This exhibition aims to bring forth French interaction with the Indian subcontinent during the 17th- 19th centuries. Visitors to the exhibition will have the chance to see authentic maps of India from centuries ago.

We are delighted to be partnering with the Embassy of France for the Bonjour India Festival 2022. We would like to thank them, as well as the many cultural partners that have been coming together to make the festival a success. This collaborative cultural festival exhibits the strong commitment of the two establishments towards arts and culture, and we are honored to be able to support the team as their hospitality partner and play a small part in helping them bring the best of France to the Indian audience.” – Pratima Badhwar, Head – Commercial, Accor India & South Asia