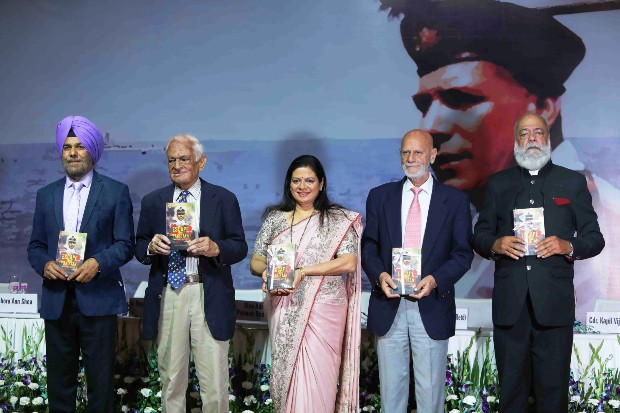 New Delhi: India has attained its independent state owing to sacrifices laid down by many officers, some of which are unknown to the world. Author Debora Ann Shea makes an effort to bring forth the story of one such unsung officer – Commodore Jack Shea through her book ‘Escape From Pakistan’. The book was launched in the presence of Chief Guest Vice Admiral Premvir Das (Retired) PVSM, UYSM, VSM, Flag Officer Commanding-in-Chief Eastern Naval Command on Tuesday, October 12th, 2021 at The Auditorium, Nehru Memorial & Museum, Teen Murti Bhavan, Teen Murti Marg, New Delhi at 4.30pm.

‘Escape From Pakistan’ is more than a pulse-pounding thriller; while it gives a first hand insight into the precarious times post partition in Pakistan, 1965, it is also a tender and inspiring story of Captain Jack Shea, who masterminded the escape, with brutal consequences to himself. Through her book, Debora makes a long-overdue tribute to her father Commodore Jack Shea – a gallant mariner who epitomised courage, loyalty and survival against overwhelming odds.

Brushing off the dust of his early life as a child, dispossessed of parental love since birth, the book traverses through Jack’s growing up years with his maternal grandparents. It throws light upon his life journey from a boy to a young man who joins the Royal Indian Navy, marries a pretty young teacher, Dorothy Hope and nurtures a wonderful family and a rewarding career.

How life changes for this man as he is posted to Karachi, Pakistan as Naval Attaché in the Indian High Commission a few months before the Indo–Pak war of 1965, is journaled adhering to years of research and deep study along with Debora’s own memories of those days. It is an account of Naval Attaché Captain Jack Shea who was chosen for a mission to bring home safely the First Secretary at the High Commission who was dangerously close to being booked for espionage in Karachi. While he manages to bring the family back to New Delhi safe by cargo ship, he lands himself into deep trouble, gets battered, thrashed and lies in coma for months in a hospital in Karachi.

As she presented her book in public, author Debora Ann Shea said, “I have longed for this day for years. I always wanted to do justice to the service that my father has done for our nation. The times we were at home and he was at his perilous duty are still vivid and Escape From Pakistan is just a written document of those bittersweet memories along with carefully examined archival resources, letters and diaries and various personal accounts.”

The story stirs one to think how trying times can crush the bones but not the undying spirit, if one has the will. Jack not only recovers, but completes his tenure in Karachi and goes on to receive the Ati Vishisht Seva Medal and Bar from the President of India. He assumed command of the 11th Destroyer Squadron, played a pivotal role in the Indo–Pak war of 1971 and retired in 1976 as a Commodore.