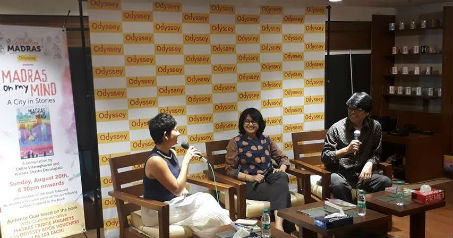 Book Launched – Madras on My Mind – A City in Stories

Chennai: Madras on My Mind – A City in Stories, was launched by its editors Chitra Viraraghavan & Krishna Shastri Devulapalli, as a part of Madras Week Celebrations at Odyssey, Adyar.

Talking about the anthology, Mr. Krishna Shastri Devulapalli said, “I would describe Madras as a safe and inclusive city, which is a massive plus, considering the times we live in. What we were looking for were not the usual, stereotypical depictions of Madras, instead, we were looking for quirky, edgy takes on our city.”

“The book is a mix of veterans and first-timers. Readers will find the book familiar yet unique Madras/Chennai, seen through the lenses of the different writers, every one of them from a different background/point of origin”, says Ms Chitra Viraraghavan. While most of the book consists of short stories, there are several superb non-fiction pieces as well. The challenge, really, was in trying to find pieces/stories worthy of inclusion, and that took time and patience, she added.

The launch was followed by an enthusiastic interaction with the contributing authors featured in the book. An audience quiz based on the book was also organized.