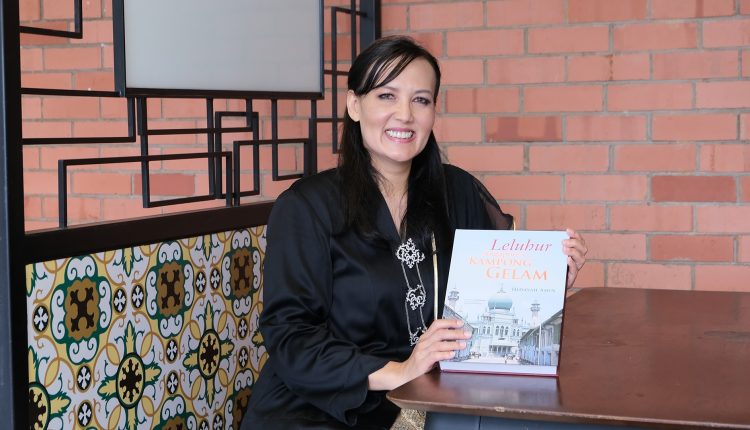 Entrepreneur and award-winning author Ms Hidayah Amin, whose work, Leluhur: Singapore’s Kampong Gelam (Helang Books, 2019), illuminates the history of one of the oldest continuously inhabited areas of Singapore, has been awarded the 2021 NUS Singapore History Prize. Ms Hidayah, who is also a NUS Faculty of Arts and Social Sciences alumna, will receive a cash award of S$50,000.

Created in 2014 in support of the national SG50 programme to celebrate the 50th anniversary of Singapore’s independence, the NUS Singapore History Prize is awarded to an outstanding publication that has made a lasting impact on our understanding of the history of Singapore, and that is accessible to a wide audience of specialist and non-specialist readers.

Mr Mahbubani, Chair of the NUS Singapore History Prize Jury Panel, said: “When I grew up as a child in Singapore, I was taught that there was only a sleepy fishing village in Singapore before Raffles came. Hidayah’s book brilliantly throws new light on the rich Malay heritage of Singapore. It describes how Singapore was a key hub in the Malay world, even prior to Raffles’ arrival, and how Kampong Gelam became its crux. In a volume packed with fascinating photographs and rich anecdotes, Hidayah has made an important new contribution to our understanding of Singapore’s history. She fully deserves the NUS Singapore History Prize.”

Helang Books published Leluhur: Singapore’s Kampong Gelam in 2019. The book is a history of Kampong Gelam, named after the Gelam tree which once grew in abundance in the area. Once the centre of trade and commerce connecting Singapore to the rest of the Malay Archipelago, Kampong Gelam served as a religious, intellectual, and social hub for the Malays in Singapore. In 1989, the Singapore government gazetted Kampong Gelam and accorded it the status of a heritage district. At the heart of it all, Kampong Gelam was home to modern Singapore’s pioneers, entrepreneurs, craftsmen, and residents including the author, Hidayah, who was born in Gedung Kuning (Yellow Mansion).

Ms Hidayah presents the history of Kampong Gelam in the context of changes to Singapore’s economic, political, and social history over the last 200 years. Few works of this type have been written. She tells the story of the evolution of the neighbourhood, including the history of its inhabitants, many of whom were non-Malays. Her study offers new insight into the district, and helps readers appreciate the complex history of Singapore and its connections to other parts of the world.

Commenting on her win, Ms Hidayah said, “I am deeply touched and honoured that my book Leluhur: Singapore’s Kampong Gelam has been selected as the winner of the NUS Singapore History Prize 2021. This book is not only about the historical narratives of Kampong Gelam. It highlights a different perspective as to what a kampong is and illuminates the spirit embodied in the local commune. It not only provides a better understanding of our past, but also pays tribute to Kampong Gelam’s significance and contribution to Singapore’s history, as well as its importance within the Southeast Asian region.”

“‘If you don’t write your story, someone else will write it for you.’ My late mother’s simple yet powerful words made me look at history, a subject I was least interested in at school, in a different light. History, essentially, is STORY – his, hers, ours. Learning the story of people, places, countries, is akin to understanding humanity, and striving to become better versions of ourselves. I hope that the future generation of Singaporeans will be among those who remember their roots, their story, their leluhur,” added Ms Hidayah.

Please refer to the Annex for the citation on the winning work by Hidayah Amin.

Hidayah Amin (also known as Cik Idah) is a daughter of Kampong Gelam, Singapore. She was born in Gedung Kuning, the Yellow Mansion. She is the first Malay Girl Guide to receive the President’s Guide Award in 1989. Educated in Singapore, France, the USA, and England, Ms Hidayah graduated from NUS majoring in Political Science and European Studies, and received her master’s degrees from the University of Cambridge and Lehigh University where she was a Fulbright Scholar. The spirited and passionate entrepreneur is also an award-winning author who has written eight non-fiction books and eight children’s books since 2010. Ms Hidayah actively volunteers in community and humanitarian projects in Singapore and overseas.

Mooted by Mr Mahbubani, the NUS Singapore History Prize aims to stimulate an engagement with Singapore’s history broadly understood (this might include pre-1819) and works dealing with Singapore’s place in the world. Another purpose is to make the complexities and nuances of Singapore’s history more accessible to non-academic audiences and to cast a wide net for consideration of works that deal with history. At the same time, the Prize hopes to generate a greater understanding among Singaporean citizens of their own unique history.

The Prize is an open global competition and is administered by the Department of History at the NUS Faculty of Arts and Social Sciences. The 2021 Prize was open to works in English (written or translated) published from January 2017 to 30 May 2021. Non-fiction and fiction works were eligible for the Prize. Other creative works that have clear historical themes could also be submitted. Book-length works that were either authored or co-authored, and addressed any time period, theme, or field of Singaporean history, or included a substantial aspect of Singaporean history as part of a wider story were eligible.

The Prize is awarded every three years and the author of the winning publication will receive a cash award of S$50,000.

The inaugural Prize was awarded on 11 January 2018 to Professor John Miksic, whose work Singapore and the Silk Road of the Sea, 1300 – 1800 provides detailed archaeological evidence that Singapore’s story began more than 700 years ago.

Enquiries about the next round of the NUS Singapore History Prize, which will open for nominations in due course, and be awarded in 2024, should be addressed to hisprize@nus.edu.sg.