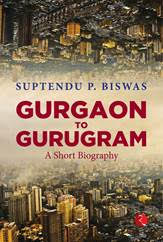 Each city lives in sets of layers and Gurgaon is no exception. Gurgaon to Gurugram explores these layers and reflects upon this ever-changing city.

Gurgaon is a city of paradoxes, of extremes and of opportunities. The face of the city changed remarkably, so did the fate of its inhabitants. The story began with the transition of the land, from the agricultural field to the real estate dividend.

A new set of people started settling in Gurgaon who had the ambition of having their own house on a plot of land. A unique urban imagery was created to portray an attractive, global and aspirational impression of the city.

More people came into Gurgaon for work and it has become a place for professionals and the educated class. The lower-end support personnel, too, kept on flocking into the city in search of livelihood. The erstwhile villages underwent demographic and physical transformations.

Over the years, the glitz and gloss as well as a palpable social separation became a part of life in Gurgaon. Gurgaon was renamed Gurugram in 2016. The new name was inspired by Mahabharata, in which the village was donated as gurudakshina to Guru Dronacharya by the Pandavas.

A city to which history had made very little sense so far, got a mythological connotation. Will the new name make it a better city or give it a new identity? Only time will tell.

SUPTENDU P. BISWAS is an urban theorist, who works on the overlapping fields of design and planning in areas of built environment, spatial equity, landscape urbanism, urban heritage and socio-cultural studies. An architect, urban designer and planning professional, he has been involved in consultancy, teaching, research and writing for almost three decades.

His multifaceted works have been presented, published and exhibited in India and abroad. A recipient of Senior Fellowship from the Ministry of Culture, Government of India, Dr Biswas is also one of the partners of VSPB Associates, an international award-winning architecture, urban design and landscape firm in New Delhi, a visiting faculty member of post-graduate courses at the School of Planning and Architecture (SPA), New Delhi, and one of the founder trustees of SEARCH, a Kolkata-based charitable trust working on urban sustainability and related spheres. He graduated from B.E. College (IIEST), Shibpur, and did his post-graduation and doctorate from SPA.

His first book, Assorted City (2015), was critically acclaimed and nominated among top five urban writings. He also co-edited Blue Lines of Kolkata (2017), a book on ideas and proposals about the canals of Kolkata. Dr Biswas is a keen observer of politics and urbanity and its inter-relationships.