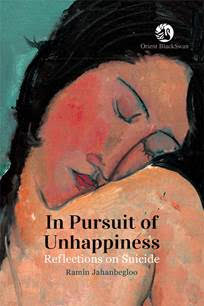 Book Profile: In Pursuit of Unhappiness: Reflections on Suicide By Ramin Jahanbegloo

In today’s world, happiness and wellbeing are often dictated to us by the State or by mass culture and shallow, consumerist and false modes of being. Not to be happy is, by definition, to be marginal, a misfit and a dissenter. In such a world, unhappiness becomes the forbidden universe of those for whom it is an act of dissent against the normative collective experience of conformism, contentment and mediocrity. It also exhorts us to closely examine the meaning of happiness. The pursuit of unhappiness, then, is to confront life in its totality, and presents an alternate horizon of truth, meaning and value for human beings, says renowned philosopher Ramin Jahanbegloo.

Life is a beautiful adventure which deserves to be lived for its own sake, fully and well; but a life full of pain without an exit door is a dark and lonely prison. Suicide, rather than being an act of despair or hatred of life, is the ultimate act of human freedom and agency by which individuals have shown that they control their destiny, and opposed the tyranny of power, be it of society or the State. This freedom belongs to those who have the courage to live an ‘examined’ life, and strive to preserve their marginality, integrity and autonomy.

In a violent, indifferent world without God and without hope, suicide offers the fragile mortal grappling with meaningless suffering a mode of transcendence and immortality, and freedom from the fear of death, which is, as Montaigne said, ‘the origin of another life…’

Book : In Pursuit of Unhappiness: Reflections on Suicide By  Ramin Jahanbegloo

Book Profile: India and the Pandemic: The First Year By The India Forum