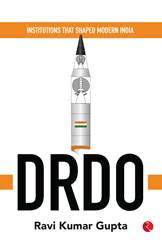 An introduction to DRDO, the organization empowering India and its defence forces.

The end of colonial rule was an important milestone worth celebrating, but what lay ahead was a long journey towards the making of modern India. The narrative of ‘modern India’ would be incomplete without the stories of institutions that helped shape India as we know it today.

This volume, part of a series on Institutions that Shaped Modern India, offers an in-depth introduction to one such institution—the Defence Research and Development Organisation (DRDO). It engagingly tells the story of DRDO from its inception to present times.

Capturing its history and its evolution, dotted with several remarkable achievements and some equally critical challenges, and offering thought-provoking suggestions too, this book is an ode to an institution that has been a crucial contributor to India’s defence needs, equipping it with state-of-the-art indigenous defence technologies, and has played a seminal role in nation-building.

RAVI KUMAR GUPTA is an independent writer and TV commentator on matters related to the role of science and technology in national security, contributing on diverse topics that include defence, security, science, technology, nation-building and self-reliance. He served at DRDO as a DRDS scientist for over 35 years and superannuated in May 2015 as Scientist ‘G’ and Director Public Interface at the DRDO headquarters.

Book Profile: BY MANY A HAPPY ACCIDENT: Recollections of a Life by M. Hamid Ansari