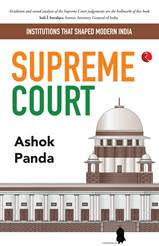 The captivating story of the country’s conscience keeper.

ABOUT THE BOOK
The end of colonial rule was an important milestone worth celebrating, but what lay ahead was a long journey towards the making of modern India. The narrative of‘modern India’ would be incomplete without the stories of institutions that helped shape India as we know it today.
Well-known advocate Ashok Panda traces the evolution of the Supreme Court of India. The guardian of the Indian Constitution and the defender of our fundamental rights, the Supreme Court has had to fight hard to ensure that the Indian State fulfils its duty to take care of the last man standing and to protect the basic features of our Constitution.

Since the very beginning, the Court has dealt with numerous complex issues borne out of India’s fast-changing social, cultural and political landscape. Through several landmark judicial pronouncements, the Court created the path of not just governance but also reformed laws dating back to the British era. The Supreme Court is truly the country’s conscience keeper.

ASHOK PANDA is a practicing Senior Advocate in the Supreme Court and was a close associate of Justice V.M. Tarkunde. Having witnessed most of the defining moments in the history of the Supreme

Court of India, he is uniquely placed to write this book.

Amazon Announces Winners of Fourth Edition of KDP Pen to…

As a close associate of Justice V.M. Tarkunde, he has been part of the human rights movement since the mid-seventies. Along with the late Ashok Srivastava, he was appointed Court Commissioner in the famous Bandhua Mukti Morcha case by the Supreme Court. He has also assisted the Supreme Court in the Jain Hawala Case.