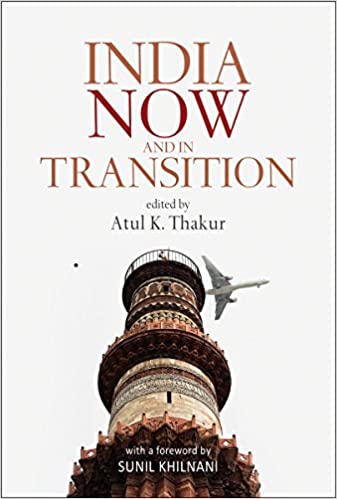 The Indian intellectuals’ fondness for canonical writers/editors and ‘rarified scholasticism’ often prevent them from engaging in debates and discussions which come from outside this construct. If they succeed to shed their obsession with ‘typicality’ and come to terms with the high stature of the writers and issues India Now and in Transition deal with, they will essentially find this book extraordinary. Atul K Thakur, the editor of this book who as a journalist has been known for his sharp and unbiased writings, have extended his commitment through his second book that is timely as it counters the ‘unprecedented changes’ which are being imposed to counter the ‘idea of India’.

The focused and methodical reading of this Collection of essays is strongly recommended for developing the holistic view of the ‘idea of India’ and India’s incessant struggle to establish a deeper and more definitive democracy. Moreover, the numerous challenges which more often create painful situations.

India Now and in Transition, edited by Atul K. Thakur, a collection of 37 essays assiduously chosen and dealt with, is an inquiry into futures based on historical change and current happenings. Serious scholars- committed to make himself/herself conversant with such relevant topics of contemporary socio-political, economic and cultural importance such as party politics to economic trends and forms of urbanisation, considerations on the media, literature, sports, studies of foreign policy, inequality and strife, the nature environment and cyberspace make it a substantial read.

The contributors of this collection include some of the illustrious and acclaimed public intellectuals, journalists, economists, writers and domain experts. The book raises the issues which most of the contemporary intellectuals, at the service of a particular political belief set of ideologies, normally tend to overlook. Here, the editor’s sincere endeavour to build a counter-hegemonic discourse through this in-depth publication is commendable.

He has done his best to be spontaneous, balanced and unbiased in his analysis without harbouring any premeditated agenda and design. The essays’ of the Collection essentially matches with the broad vision of the editor and mandate set by him. His own essay on “Radical Dissent” is a deep analysis of the fissures, being created through the mismatch of developmental plan and delivery – and corporate plunder.

The first essay- “Indians—Great, Greater, Greatest?” written by eminent historian Ramachandra Guha makes a very incisive comment on the construction of the narrative in which national heroes are made. Guha says how the construction of national pantheon is offshoot of power politics, rarely straightforward and uncontested. He exposes the cunning move of the ruling party which tries to inflate its own contributions to the nation’s past, present and future. The anointing of the Singular and Unique goes against the plural ethos of a democratic Republic.

In his essay, “The Enduring Legacy of Dr. Ambedkar,” Shashi Tharoor talks about the phenomenal contribution of Ambedkar in the championship of the Dalit cause and his unparalleled contribution in the formation of Indian constitution. Tharoor writers it is highly unfair and unjust and shows the myopic vision of the public intellectuals who reduce the life of the extraordinary Indian like Ambedkar to one issue-his championship of the Dalit cause.

Bijoylaxmi Hota’s latest book highlights the role of Yoga in…

Rajiv Bhattacharya’s essay, “What Ails the Northeast?” is an honest and straightforward attempt to unearth the abject plight and problems of Northeast and the centre’s step-motherly and discriminatory approach towards the region. Bhattacharya says how India’s Northeast has been consigned into the oblivion from the national consciousness. His statement “It is difficult to accept that a country that has sent a space mission to Mars would have no answer to get rid of mis-governance and anti-people character of the state administration in the Northeast” exposes the administrative apathy and callousness and lack of will to come up with the plausible solutions for the problems of northeast people.

Former Cabinet Secretary of India TSR Subramanian is his incisive piece “Can India Afford not to Eliminate Corruption” focuses on the endemic corruption in India. Political will and exemplary swift punishment are some of the solutions he offers for the elimination of the endemic of corruption. He writes “If there is the will, corruption is one of the easiest areas to address and tackle in a relatively short period”. He cites the example of Hong Kong (which succeeded in rooting out corruption in a short span of time) to substantiate his argument. Subramanian throws light on the fact that the administrative system has become largely non-functional or rather dysfunctional and unresponsive to the interests of the masses.

Abdullah Khan’s article “The Alchemy of Multiple Identities” shows the ‘anthropocentric’ approach in solving the identities issues in India. He urges the readers to look back to their own basic identity which is replete with humanity and progressivism and to shun the insanity around and reclaim the basic human qualities. Khan warns the readers of the terrible consequences of the ‘miniaturisation’ of identity. He rightly believes, the presumption that people can be uniquely categorised based on religion diminishes human beings and makes the world flammable, instead of adopting the ‘solitarist’ approach to human identity, the need is to develop the broader humanitarian perspective of identity.

Despite the constraints of space and technical hassles, India Now and in Transition deal with all crucial aspects of changing India. The honest and selfless effort like this from the editor is a rarity in today’s time when the intellectuals’ are fast losing their freedom of expression for petty and major vested interest. India at crossroad, really needs many more publications like this which could effectively safeguard the national ethos, integrity and values.

(Krishna Nand Mishra is Assistant Professor (English), KSDSU, Darbhanga. He can be reached at: krishnabhu53@gmail.com)