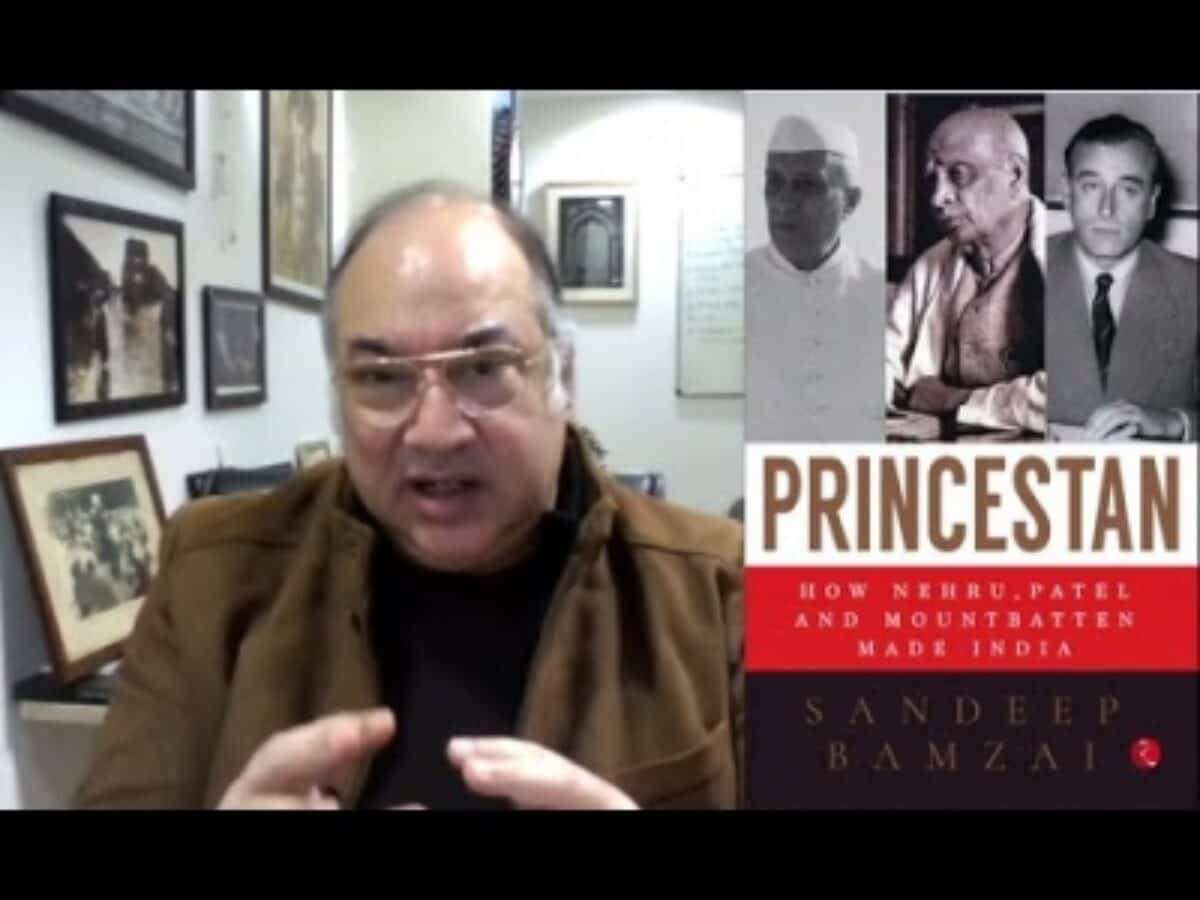 There was no dearth for secessionist claims either. It seems like throughout the second half of the century, after the Indian Union came into being, almost every corner of the country wanted a separate nation, every province harboured a desire to be declared a sovereign nation.

The idea was to create a third dominion called “Princestan” where the 565 princely states would stay outside the ambit of the two free states and retain paramountcy under the aegis of the departing British. The success of such a malevolent plan would have made the newly independent nation unstable and vulnerable. However, three persons stood in the way of the nefarious British plan to balkanize India. This is the hitherto untold story of how Jawaharlal Nehru, Lord Mountbatten and Sardar Patel battled the rulers of the princely states at every twist and turn to foil that cunning plan, even as the process of decolonization had begun.

Sandeep wrote, this was how “Princestan” was formed. An intricately researched and elegantly written epic history peopled with larger-than-life characters, it is the work of a major scholar at the peak of his abilities.  He puts in great effort to add perspectives from a variety of sources – letters, memoirs, biographies, news reports and even his personal experiences – to ensure that we understand what was going through the minds of not only those in power, but also those fighting to oppose them.

The beauty of this book lies in Author’s sincere and unbiased approach blended with a unique writing style. The sensitivity and thoughtfulness that the writer has displayed while describing every anecdote are incredible.  Princestan is principally a political history – Sandeep Bamzai covers the major events that occurred in India right after independence, and their impact on the political and social landscape.

Over various chapters Sandeep gives us the perspective of the different lives caught in this crossfire between the newly independent nation India and its princely states.

How a section of diabolical princes actually managed to a large extent to stay out of the ambiente of Hindustan and Pakistan till brought to heel by Pandit Nehru, Sardar Patel and Lord Mountbatten in what people believed was a relay run. The princes never wanted independence.  The Nizam of Hyderabad convinced the British to be called His Exalted Highness.

The princes together representing the British Monarchy in India actually had something called Narender Mandal which was the chamber of princes and the Chancellor of the Chamber of Princes was the Nawab of Bhopal Hamidullah Khan.

Further, you came across in the book many reference points about a diabolical plan being hatched at the behest of British PM Winston Churchill and Viceroy Lord Wavell using Mohd Ali Jinnah and the canny head of the Political Department Sir Conrad Corfield to ‘keep a bit of India’ as they pushed forward with a plan to de-colonise India. To balkanise India, they encouraged a catalogue of crafty Indian Princes to speak the forked tongue of freedom from The Indian National Congress and independence for themselves.

Led by the saboteur Nawab of Bhopal and a handful of other powerful princes, they wanted to create a Third Dominion called Princestan in parallel to India and Pakistan. This is the story of how that plan vivisect India was foiled.

Churchill called Wavell to his office before he’s ousted in the election and told him to make sure that we keep a bid for India. That conspiracy is Princestan,” . It is an easy read, perfect foundation for anyone who wants to both experience India after 1947.  The reason I would urge you to read this book is for you to rethink and re-access the entire situation.

The plan was led by the Chancellor of the chamber of princes, Nawab of Bhopal, who was operating under the patronage of Mohd. Ali Jinnah, Lord wavell and British prime Minister Winston Churchill. Sandeep had dug deep into the archives, unpublished materials and letters while concluding his well-researched book.

Mountbatten lambasted the princes and told them that you have to sign a standstill agreement with either India or Pakistan as the Dominion is formed.  There was a record which says that Princes and particularly the Nawab of Bhopal has been sold out by the decolonizer called Mountbatten. The Narender Mandal or the Chamber of Princes is called the Bastard child of Montague-Chelmsford reforms and INC never believed in it. Sandeep writes it with supportive details.

Sandeep writes in the book that Gandhiji was not ambivalent to the princes like Nehru, Patel and some of the other congress leaders.  Gandhi in the Second Round Table conference said that “You shouldn’t toe the British line and you should make Independence easier for the country.” Gandhiji never wanted any sort of revolt from any section of the society. His methods were more towards assimilating whether the princely states or the different castes of Hindus and Muslims together in one battle.  Gandhiji believed in people to coexist in India.

Organization of All India states conference is Nehru’s creation. Nehru threw down the gauntlet at Gandhi and said we have to ensure that Princely States with the rest of the Union of India. Princes were virulent organisms. They didn’t understand anything, but themselves. They were totally power drunk. Nehru’s upbringing, his thought process was constantly evolving and it was always anti monarchical. Nehru always lambasted and fulminated against the princes. The fact that he was anti monarchical from the beginning. Nehru never ever liked the princes and this stems out of his Anti Monarchical and Fabian socialist thinking. Bamzai’s had been both empathetic in his approach and meticulous while documenting.

There were dialogues with various princes at various times and in most cases the princes always won till Mountbatten lashed out at them and told them that there’s no other way if you were thinking post Aug 15 you would create your little empire and British are going to support you. That’s where Princestan comes in.

Patel asked Menon are you happy with the contours of what you see?”

Sardar Patel also asked this to Menon, will Mountbatten bring all 565 apples in a basket and place it to him?

Menon answers with the affirmative to Patel and Patel gives thumbs up and that is how India is created.

VP Menon is a hard nose tough bureaucrat who had worked with Mountbatten earlier. He travelled endlessly from Odisha to Bhavnagar. Patel was smart enough to understand there was this guy who could deliver the basket of apples he was promised. Menon goes to Shimla, works on Dicky Bird plan, ratifies the plan from Nehru, approves the plan from Mountbatten. Menon then calls Patel and explains to them how Nehru and Mountbatten have gone beyond the Dicky Bird plan and they have a new plan that both have approved.

At all times in the run up to the independence of India, Nehru, Patel and Mountbatten play a crucial role. 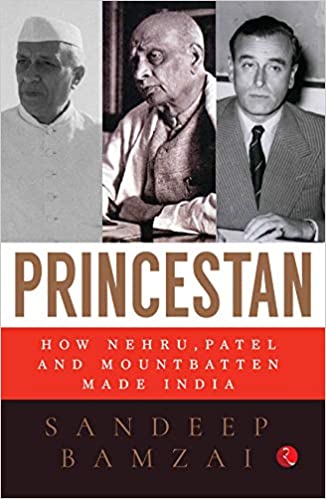 There is a view that Nehru was a Pacifist, but as a Fabian Socialist, he abhorred the Monarchy and all its manifestations. Nehru believed in the concept of a whole unified India which included the provinces and the princely states and he front ran the whole thing himself by taking on the rulers of Nabha, Faridkot and Jammu & Kashmir.

Sandeep’s book “ Princestan” is shaking up the widely held belief that Nehru to be a soft leader and Patel to be an iron man of India.  Sandeep writes further on his return to India, Nehru announced at every twist and turn in the freedom struggle this visceral hatred for the Indian Princes who he thought were blood sucking leeches not allowing democracy to fester in their respective kingdoms, he even took on Gandhiji’s concept of keeping aloof from the princes for he believed they were trustees and as such meant to rule.

Sandeep mentioned in the book with the facts that why equal credit should also be given to bureaucrat V P Menon who helped Sardar in roping the errant Princes and reorganising the states and the map of India.

This book is sure going to ruffle some feathers in a section which is appropriating Patel’s legacy and pitching it against Nehru.  The anecdotal references from probably the world’s best literature not only reveal the bibliophile in him, they are also tremendously motivating.

Sandeep Bamzai succeeds magnificently by furnishing an insightful post-independence (albeit Nehruvian) narrative history of India that sheds light on the unprecedented miracle that is the Indian nation-state.

Very rarely has history been told in such colour and with such emotion. Rightly deserves to be called Sandeep’s masterpiece.

(Ashutosh Kumar Thakur is Bangalore based Management Consultant, Literary Critic and Advisor with Kalinga Literary Festival. He can be reached out at ashutoshbthakur@gmail.com)

Book : PRINCESTAN: How Nehru, Patel and Mountbatten Made India by Sandeep Bamzai