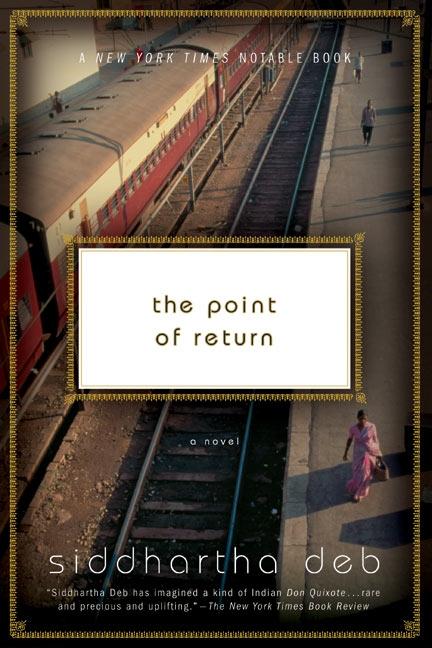 Siddhartha Deb is an Indian English writer from Meghalaya. The place where he grew up always provided him the raw material for his writings. He himself says, “This is an obscure and turbulent area, and it has informed much of my work, including my two novels, The Point of Return and An Outline of the Republic”. Deb has been awarded PEN/Open
Book Award for his book The Beautiful and the Damned in 2012. His debut novel The Point of Return was a New York Times “Notable Book of Year”, 2003. His book An Outline of the Republic was long listed for the “Impac Dublin International Award” and shortlisted for the “Crossword Prize” in India, and the “book of the year” in Daily Telegraph, London.

Deb’s novels are authentic portrayal of the contemporary society as he explores the issues quite pertinent to the life and society of the time. He is not merely concerned with the external conflicts and happenings, but also delves deep into the internal crisis , mental and psychological sufferings which a person faces when he/she undergoes discrimination and
displacement in his own home. The issues which are prominently recurrent in his writings are related to politics, social norms and economic destitution and its impact on the life of a common man, rampant corruption, helplessness of the common man before the oppressive and despotic bureaucracy and ethically insolvent politicians. Along with the burning contemporary issues, Deb also brings out the historical facts related to politics and society and their impact on the people at the present time. Autobiographical note is another hallmark of his writings. Deb through his novels brings out the issues and problems of his state. Deb’s another novel like An Outline of the Republic or Surface, published in 2005 focuses on the various social issues prevalent in North Indian states.

The insecure environment of these states, problem of insurgency and other issues like ethnic clashes, drug use and highest rate of illiteracy are other predominant themes of his writings. In his deep concern for the problems besetting and beleaguering the Northeast region, Deb may be compared with other promising authors of the region—Mitra Phukan’s’ The Collector’s Wife set against the Assam Agitation. Assam is in the grip of insurgency and it is this bleak and dismal backdrop against which the novel is written. Aruni Kashyap’s novel The House with a Thousand Stories is set in Mayong, disturbed by insurgency and military brutality. Set against the backdrop of the merciless and barbarous killings (1998-
2001) in Assam, one of the most dreadful and ignominious chapters in India’s post independence history. Another distinguished writer, Umakanta Sarma whose novel The Bharandas interrogates from the margin the nationalist narrative with its prejudiced approach, critiquing the homogenising voice of nation-state and the hegemony of the national and sub-national elites.

Northeast India is known to other parts of India and world as the hotspot of ethnic violence, extremism and insurgency. The region has become synonymous with ethnic clashes and conflict. Inhabitants of this region are treated as aliens or foreigners in their own homeland. There can be nothing more excruciating and agonising than to see -a person faces discrimination, deprivation and maltreatment, simply because he has different physical features, different way of life, food habits, dress code etc. In other parts of India, insulting and humiliating remarks are hurled at them.

Amazon Announces Winners of Fourth Edition of KDP Pen to…

The nation- centric narratives have often failed to notice the microstories of the region and to take account of contemporary history-in the making. As Deb himself calls in an interview with The Hindu when asked about his novels set in North East region he answered, “That’s where I grew up and because no one in the mainstream India writes about it. There
wasn’t and still isn’t any interest in the region” (Bhatt, Shakti, An Interview with Siddhartha Deb. The Hindu. 3December2006). It is only very recently that English writings from the North East have emerged and has helped to bring the region and its issues in the mainstream. It has still to carve out a place in the nation-centric narrative of Rushdie, Tharoor, Ghosh and others. There are works in regional literature but whereas,
writings in English or translation are concerned, the northeast literature is
still in its infancy.

Siddhartha Deb’s novel The Point of Return reveals the fractured and fragmented relationship between Tribals and Non-Tribals. It shows the wretched condition of the Bengali immigrants displaced by the partition and ethnic violence in the Northeast region. In the novel Deb raises various problems ensuing from ethnic disharmony and disturbance. He not only focuses on the physical sufferings and torture but also delves deep
into the psychological effects such as isolation, identity crisis, search for autonomy, pangs of displacement, plight of minority people and communities, trauma and terror faced by them, the anxiety and anguish of being considered as ‘Other’ in their own homeland. These issues are mainly discussed through the character of Babu and his father Dr. Dam.
When the novel opens in 1987, Dr Dam has just suffered a stroke, mere hours before the family planned to leave the town in Assam where they have been living. Dr Dam’s stroke has profound effects on the family and Babu in particular and second half of the novel takes the reader from 1987 to the present, as Dr Dam struggles to walk again. Deb shows how ethnic violence in the region leads to the loss of identity of minority group. Dr Dam was forced out of what was to become East Pakistan after partition, and was later to become Bangladesh. But he and other Bengalis could not find a place which they could call their own. The Dams have undergone innumerable obstacles in their desire to carve out a home in Assam among tribal people whose own cultural traditions were repressed by the previous
British occupiers and who now regard the Dams and Bengalis in general as interlopers.

Local tribes, who are vehemently aggressive in asserting their ethnic identity, think any outside infiltration and immigration as threat and contamination to their isolationist purity and are always after the lives those whom they consider outsiders. The abject condition of migrant, the person who doesn’t belong to anywhere is also depicted through the persona of Dr. Chatterjee. Discussing the neglected and forlorn state of Bengali minority, Dr. Chatterjee says that no matter how long they remain in their adopted home in the hills, they will remain foreigners forever. As he says “We are dispersed people, wandering, but unlike the Jews we have no mythical homeland. Nor do we have their achievements
that would make the world recognise and fear us one day.” (287) Babu shows in the novel, the enormity of physical and mental torture he suffered due to the conflicts of Tribals and Non-Tribals as he himself was a Non-Tribal. He remembers how in the childhood days during a protest he heard the slogan like: “Go back foreign dogs, go back Bangladeshis”. He remembers the untold miseries he underwent because of his non-tribal identity, for not speaking the same language as the tribals spoke, for having different physical features and complexions. Babu faces an acute identity crisis; he does not have any sense of belonging. People like him were not accepted anywhere. He is in perpetual feelings of fear and
alienation and feels quite helpless and impotent. He recapitulates one horrible accident when he and his father, unaware of the curfew went out and were ruthlessly beaten and battered by the people in market. Police were also insensitive to them; both Babu and Dr Dam felt utterly devastated. As Babu explains:
“We stood there on the road, brushing the dust off our clothes. My father looked more embarrassed than scared or angry and the arrival of three policemen did not help. They wanted to know what we were doing there and why we had not seen the posters
in the market place.”

After leaving his homeland, Babu learns about the various attacks on NonTribal people which were inhuman and downrightly condemnable. Dr Chatterjee kept informing him of brutal, barbarous and merciless killing of non-tribals. Dr. Dam and Babu had to endure racism and unprovoked assault from the tribal people in the new state, in the very town which had been their home until then. Babu for whom the town was only home he
ever knew could not understand how people are suddenly divided between “us” and “them”, how in the very town they called home, they came to be called “Dkhar”-foreign dogs.

Deb presents a very poignant and touching narration of the ethnic struggles, the novel shows the urgency of re -narrating the nation from the margin and also calls for the rethinking of the concept of nationhood and national identity or belonging.