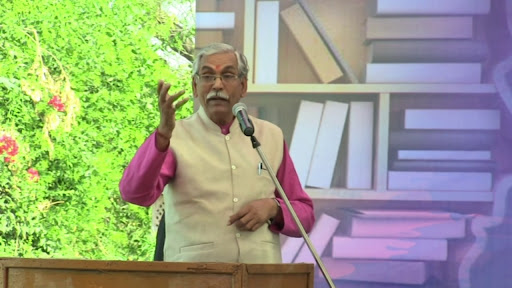 Book to be launched on Prof. Baldeo Bhai Sharma on November 12

Governor of Chhattisgarh and Maharashtra will be present at the event

New Delhi: The launch ceremony of Ram Sundar Kumar’s book ‘Manush Janam Amol’, centered on the persona and work of Prof. Baldev Bhai Sharma, senior journalist and Vice Chancellor of Kushabhau Thackeray Journalism and Mass Communication University, Raipur, will be organized on November 12 at Maharashtra Sadan in New Delhi. The Governor of Maharashtra, Shri Bhagat Singh Koshyari will be the chief guest of the program and the Governor of Chhattisgarh, Ms. Anusuiya Uikey will preside. Director General of Indian Institute of Mass Communication Prof. Sanjay Dwivedi and spiritual guru Sant Pawan Sinha will also attend the program as special guests.

Prof. Baldeo Bhai Sharma’s life narrative and journalism are described in depth in this book released by Alokparv Prakashan. Prof. Sharma, who was the editor of the country’s prestigious newspapers Dainik Bhaskar, Amar Ujala and Swadesh, has also been the HoD of the Department of Journalism in Central University of Himachal, Dharamsala. As the Chairman of the National Book Trust, he has been instrumental in giving a new and comprehensive look to the National Book Fair.