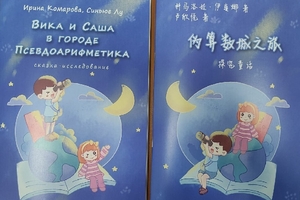 The book “Vika and Sasha in the City of Pseudo-Arithmetic” is a research tale written jointly by a student from China Lu Xinyue and her supervisor: Candidate of Pedagogy, Associate Professor of the Department of Theory and Methodology of Primary Education Irina Vasilievna Komarova.
The heroes of the tale – younger students, miraculously find themselves in a city whose residents (questions) are constantly thinking about something. Children, as a result of unexpected trials that require research, at the end of their adventure, understand how important it is to take an interest in everything that surrounds them, as well as in what adults explain. There are many dialogues in the book that lead the reader from single mathematical judgments of Vicki and Sasha to logical conclusions. The book will certainly be interesting and useful not only for children of different ages, but also for parents and teachers.

Irina Vasilievna said that the work on the book lasted about three years and was very difficult. First of all, this is due to the problem of the language barrier, aggravated by the conditions of the distance format. For example, according to her plan, the children were supposed to be in the city of questions and carry out research tasks together with the readers of the book, but a slightly different story about the city of Pseudo-Arithmetic turned out. However, this did not spoil the book. It is also important that at the final stage, the fulfillment of tasks by a team of professionals made it possible to prepare a book for the “My first discoveries” festival.

This is my first experience of such work. I think that PetrSU Publishing House too. The main difficulty was to correctly arrange both versions of the text so that they mirrored each other. Since the Chinese text is organized in a fundamentally different way: it is typed in a different operating system, consists of separate hieroglyphic pictures and at the same time contains a second row of superscript characters in Latin, it cannot be structured using hyphens, spacing, etc., it does not obey the usual formatting methods … But here the skill of the art editor Yulia Markova has already manifested itself. My task (in addition to editing the Russian part) was only to coordinate the actions of all parties and track possible disruptions. It was interesting to work. Not everything was noticed at once: errors in the transmission of inscriptions in drawings (inverted Cyrillic letters and missing translation in the Chinese version, etc.). Questions arose that had never been addressed before. For example, how to design the bibliographic apparatus of a bilingual upside-down book. The most important thing is that the work of all four (two authors and two editors) went smoothly, in concert, with a desire to understand and help each other,said the editor Anna Ivanovna Solopova.

The methodological manual prepared by Irina Vasilyevna and Sinyue – a high-quality and colorfully designed edition – became a wonderful gift to the laureates of the republican festival “My first discoveries”, which took place during the spring school holidays. By the way, the peculiarity of this book is that all illustrations are also made by Lu Xinyue. And also, I think, it is fundamentally important for our Chinese student that the fairy tale has been translated into Chinese, and this translation is contained in this book, said Svetlana Iosifovna Smirnova, head of the Department of Theory and Methods of Primary Education.

As for creating this book, I think the hardest part is not being able to clearly articulate the content of the Russian version, because the help and translation of friends is needed to write authentic Russian stories. Since there are many professional terms that I cannot understand with translation software, this is the biggest problem. Of course, at a later stage, everything was resolved. Clearly understand what to do, what to draw and what story to write. I also want to thank Irina Komarova for the fact that she did not refuse to work with me. I also want to thank my friends from Russia who helped me translate, thanked Lu Xinyue.