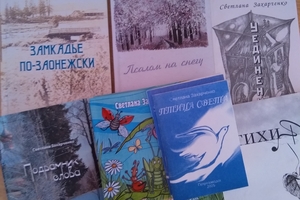 Svetlana Olegovna Zakharchenko – Associate Professor, Candidate of Philology, Member of the Union of Russian Writers, Member of the Library Council of the Scientific Library of PetrSU .AS Pushkin “the city of Kostomuksha his own books about his native land, including the works of” Zamkadye in Zaonezhsk “and others.
Deputy director for educational work of the Borovsk school M.N. Karnauch:

Assistance in the transfer of books was provided by the director of the Interdistrict Center of PetrSU in Kostomuksha E.Yu. Guseva.

The event was implemented within the framework of the flagship university development program.

“Traditional costume as a mirror of Karelian culture”