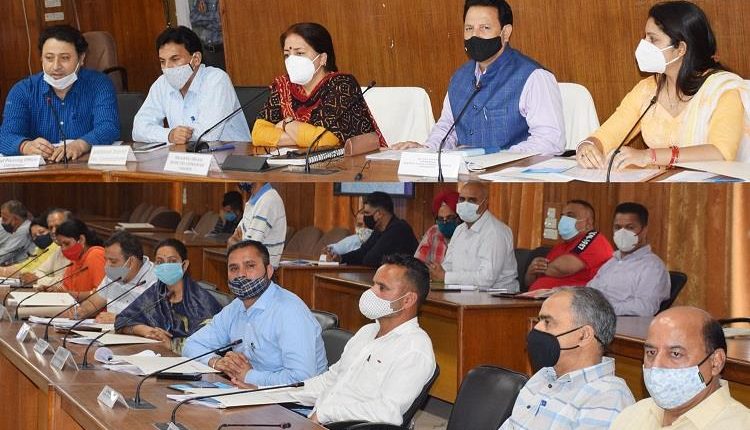 At the outset, Chief Planning Officer, Rajeev Bhushan gave a detailed PowerPoint presentation on the Formulation of District Development Plan for the current year.

“The establishment of three tier Panchayat Raj System with the formation of District Development Councils, Block Development Councils and Panchayats calls for democratic decentralization by their involvement in the formulation and implementation of the District Plan. To strengthen grassroots democracy requires participatory planning by involvement of all stakeholders in identification of key areas of development the role of PRIs is pivotal” he said.

The participants were informed that the major components of District Capex are UT component/ Regular Schemes, Negotiated Loan, Central Share for CSS and State Share for CSS. He added that more than 90% contribution of District Capex is from CSS viz. NRLM, MGNREGA, PMAY, AIBP (PMKSY), SMARGA, MDM, JJM, PMGSY. He said that the District Development Plans will comprise of Block Dev. Plan which will cater to the list of issues that are required to be addressed at Block Level. The planning at Block Level will ensure that issues between different Panchayats are addressed where it involves more than one Panchayat. District Development at the grass root level i.e. Panchayat Development Plan will be formulated involving Gram Sabhas.

This exercise will be bottoms up planning process based on ceilings. The plan to be formulated in a period of 20 days shall comprise of panchayat plan block plan and district plan.

The DDC Chairperson appreciated the efforts of District Administration for holding such a valuable interaction programme for the Council representatives. He said that such programmes go a long way for effective formulation of District plan which would definitely percolate benefits to grassroots level.

The DC said that timely formulation of the development plan will help a lot to take up the works in time and utilization of budgetary provision.

“ There is need to keep the key area in mind while formulating the plans so that larger population can be benefited and demands of back to village , block diwas and IGRAMS be covered so as to meet public aspirations” the DC said.

Special funds for Panchayats, BDCs and DDCs have been Provisioned in district ceilings so that maximum outcome is achieved through Participatory planning, she added.

University of São Paulo: WHO warns of marketing that encourages breast milk…

iednewsdesk Apr 11, 2022
A study recently published by the World Health Organization (WHO) in conjunction with the United Nations…

University of São Paulo: In the atmosphere of Mars, sound has two…

University of São Paulo: Games for Change goes beyond entertainment…

University of São Paulo: WHO data show that Brazil is the second…

University of São Paulo: Green flag can represent a reduction of up to…

University of São Paulo: New species of jellyfish is named in honor of…