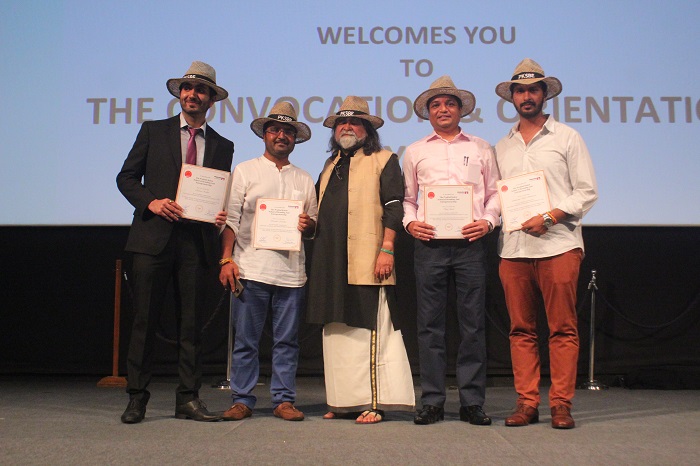 Mumbai : The Prahlad Kakar School of Branding and Entrepreneurship is a one of a kind institution established to nurture the personal and professional development of budding entrepreneurs. With its cutting-edge academia and novel learning process, the institute has always strived to push its students to progress ‘Beyond Fear’. At its convocation and orientation ceremony, the creative stalwarts of the institution- Prahlad Kakar- Founder&Chairman PKSBE, Pratish Nair- Managing Director and Founder PKSBE, Priya Menon- Founder & Director Marketing Communications and Outreach PKSBE, Reah Irani- Founder & Director of Operations PKSBE, Rahul Puri- Managing Director Of Mukta Arts and Head Of Academic WWI, Meghna Ghai Puri- Founder WWI and Mr.Subhash Ghai- Founder WWI among others; gathered to congratulate the students and share their personal journey with PKSBE.

The ceremony commenced with a description of the inventive training activities that the institute had conducted. Skydiving, learning horse-riding, up-close and personal with sharks among others were activities that the students at PKSBE performed to overcome fears and be risk-takers. Further, Pratish Nair shared the story behind the inception of PKSBE and how Whistling Woods International had been a paramount support in its establishment. In the orientation, Kaustubh Dhargalkar educated the new entrants about the philosophy PKSBE as an institute practiced. He said, “The whole philosophy is that students should come to a point where they feel we don’t know anything. That is where the learning begins.” On a similar note,Prahlad Kakar expressed the need of identifying a career path with zeal, he further provided details on the one- year travel-programme that PKSBE aims to introduce. Explaining the objective of the programme Prahlad revealed, “The students will not study in this programme. They will observe, interact and be cultural ambassadors.”In addition, the Ad-guru extended his gratitude to Subhash Ghai for his constant support and encouragement. On the joyous note, Subhash Ghai said, “it’s so nice of Prahlad. He is my inspiration and he doesn’t even know about it. I have admired this man always. He has trained his co-workers and has created many directors and producers. WWI is honoured to be associated with you. Thank you.”

As the event progressed the audience was briefly acquainted with various ad-films created by the graduating students during their time at PKSBE. As a mark of motivation for the new entrants, the dignitaries provided information about the noteworthy work-profiles undertaken by the alumni of the institution.From the advertising department, former-students achieved jobs in applauded brands and organisations like Chrome Pictures, reality TV shows- Skulls and Roses and India’s Next Top Model amongst others. While some alumni from the Entrepreneurship department established their own businesses- Devendra Mahalley and Abhimanyu Singh Shaktawat started ‘Zero Jhanjat’ (Co-living Spaces), Raunaq Kakar established‘Lawpreneurz’(a forum for digitalized law education) and Vijay Raul set up his business in the sector of real-estate. He has alsostarted construction work for upcoming projects in Navi Mumbai.

The insightful ceremony marked its end with a thunderous applause as the talented graduates of PKSBE were felicitated by the esteemed dignitaries.

SHRM India Annual Conference and Expo off to a glittering start

Vaccination, Jobs, and Social Assistance are All Key to Reducing Poverty in Central…

AMU World Alumni Meet to be held on October 18

On Global Handwashing Day, UNICEF warns that 3 in 10 people do not…