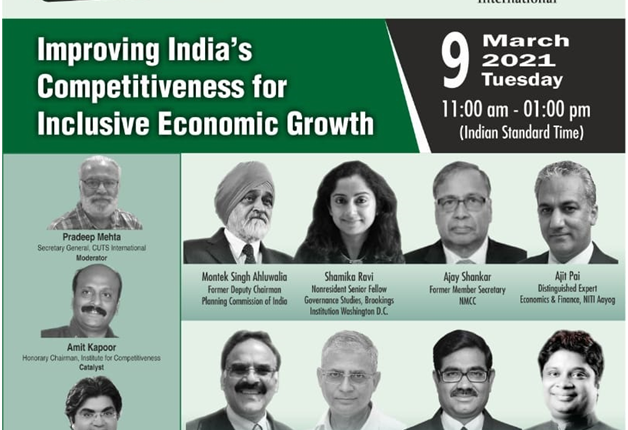 New Delhi: He was speaking on the third in a series of webinars organised by CUTS International on “Improving India’s Competitiveness for Inclusive Economic Growth”.

“The problem boils down to the fact that we simply have not grown fast enough, as an economy. The underlying challenge is the ineffectiveness to translate broad uncontroversial objectives of competitiveness and growth into concrete and actionable policy programmes yielding results in a time-bound manner”,said Ahluwalia.

The webinar touched a wide spectrum of issues ranging from global to sub-national and macro to micro. On the issue of India not joining the Regional Comprehensive Economic Partnership, there was a divided house with panellists putting forth their opinions. The pro-RCEP arguments were premised on the need to participate in the globalised economy in order to reap benefits of higher levels of global competition.

On the other hand, examples of economies like Japan and Korea were cited which adopted the route of becoming global champions of manufacturing first, before opening up their economies for trade and investment. State capacity to negotiate trade deals better was highlighted in order to foster better and effective trade agreements with the likes of European Union, the USA and RCEP members excluding China.

Speaking on the webinar, Ajit Pai, Distinguished Expert, Economics and Finance, NITI Aayog, advocated for designing a sequential strategy of policy interventions in order to achieve the objectives of competitiveness. Developing scale of manufacturing, both as a strategy and as an outcome of policy instruments, should be the imperative to achieve this, he highlighted.

According to Ajay Shankar, former Member-Secretary, National Manufacturing Competitiveness Council, one of the less-discussed strategies for infusing cost-competitiveness in domestic value-addition and exports is of artificially appreciating the real exchange rate.

“These include incredibly low overall (and women) labour force participation rate, low levels of private participation in capital formation, sidelining of education and healthcare sectors as enablers of economic growth, widening gap of skill development and detachment of jobs with industrialisation agenda”, she mentioned.

Rajat Kathuria, Director and Chief Executive, Indian Council for Research on International Economic Relations and Manoj Panda, RBI Chair Professor, Institute of Economic Growth, while reiterating the need for looking at global as well as domestic competition landscape, stressed on the need for capitalising the comparative advantages of different states while moving forward in a competitive yet collaborative manner.

The panellists also highlighted the potential disastrous impacts of detaching agendas of healthcare, education, skill development, human capital and decent jobs from the broader economic visions. There was a general consensus on the fact that the bank-for-the-buck lies in enhancing competition regimes and logistics ecosystem, rather than jacking up protectionist measures in the economy.

The session was moderated by Pradeep Mehta, Secretary General, CUTS International, who articulated the vision of Atma-Samman, or self-confidence, of the domestic industries being the driver for true Atma-nirbharta and pursuing global value chains.

Mehta also pointed out that several committees etc have gone into the issue of improving India’s competitiveness but every new committee ends up reinventing the wheel rather than enquire into the earlier progress. It thus wastes taxpayers’ money and delays desired reforms.

Bipul Chaterjee, Executive Director, CUTS International, concluded the webinar by focusing on the need to get the granular corrections right, in order to achieve the macro objectives of competitiveness and inclusive growth.

The webinar saw a participation of over 100 participants, and included prominent experts like Ashima Goyal and Bidisha Ganguly, who have been panellists in the previous editions of this series.

These rich discussions of the colloquium of webinars are being captured for developing and constantly refining an evolving and implementation-oriented White Paper on “Competitiveness and Inclusive Growth, which is premised on the working papers of Amit Kapoor, Chairman, Institute for Competitiveness and Pritam Banerjee, Independent Trade and Logistics Specialist, who have been the catalysts for this series of discussions.

mPokket to provide scholarships to 4000-plus college students across India